Here is the true and original recipe for these sinfully delicious Neapolitan graffe (also called graffette or ciambelle) Italian donuts, traditionally made during Carnival 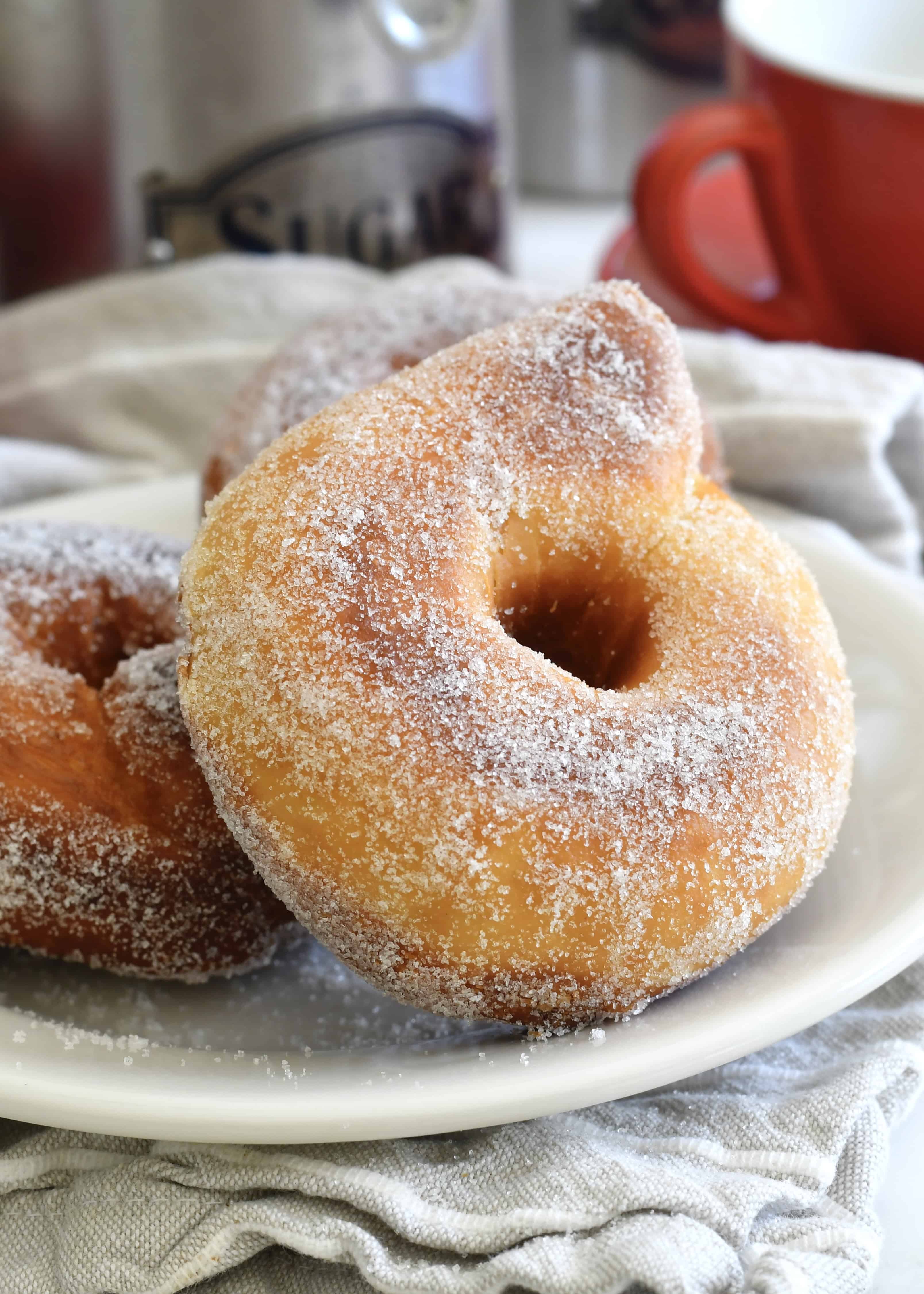 Here is my recipe for these soft and light, lick-your-sugary-fingers delicious graffe (Italian fried “donuts”)… Just like the graffe you would find in a caffe’ in Napoli. Or almost like it;) 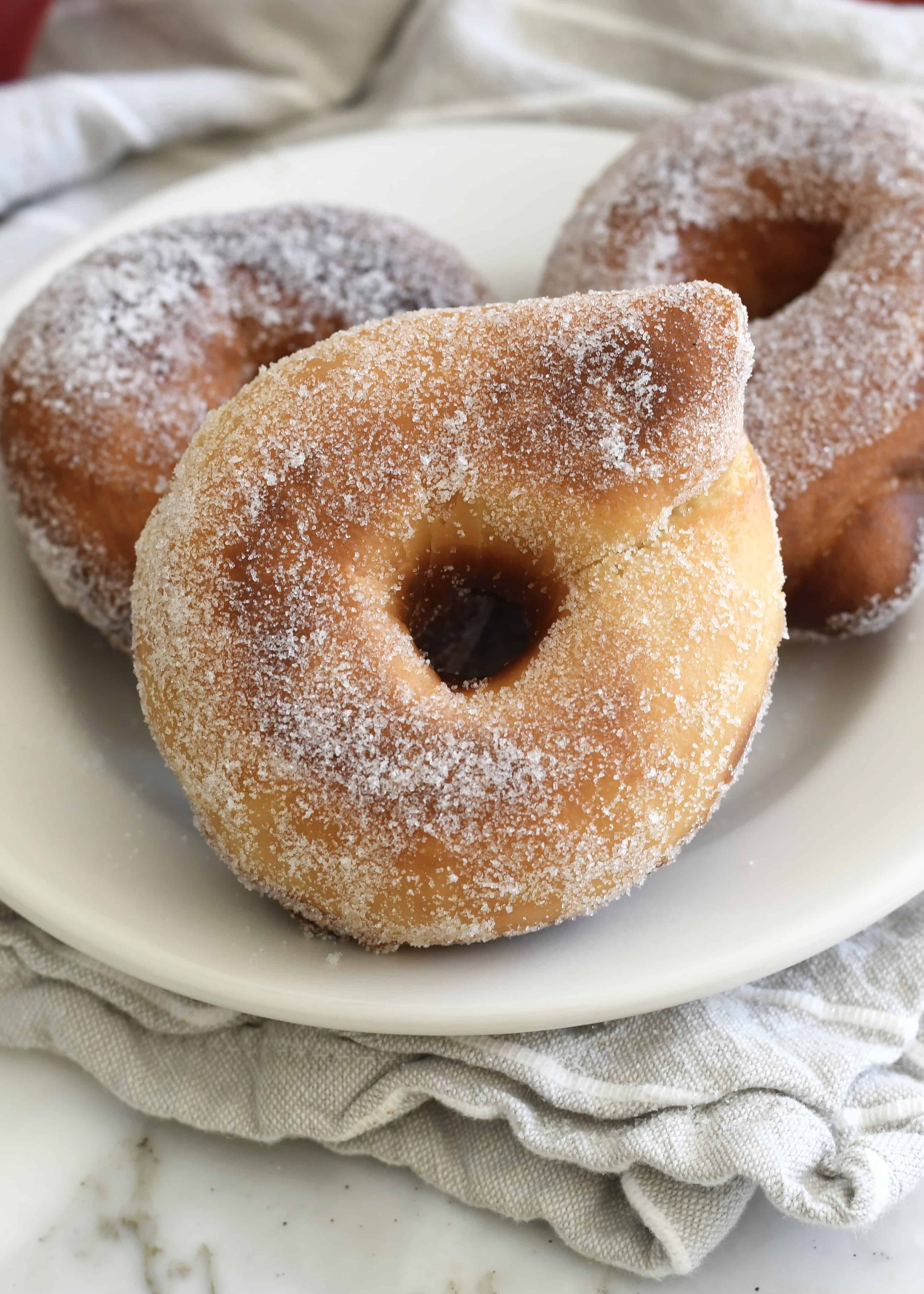 Graffe are donuts traditionally from Naples, that are eaten during Carnival all over Italy – together with other fried treats made this time of the year, like frittelle, chiacchiere and castagnole. You can find my recipes for these Italian desserts in the links. 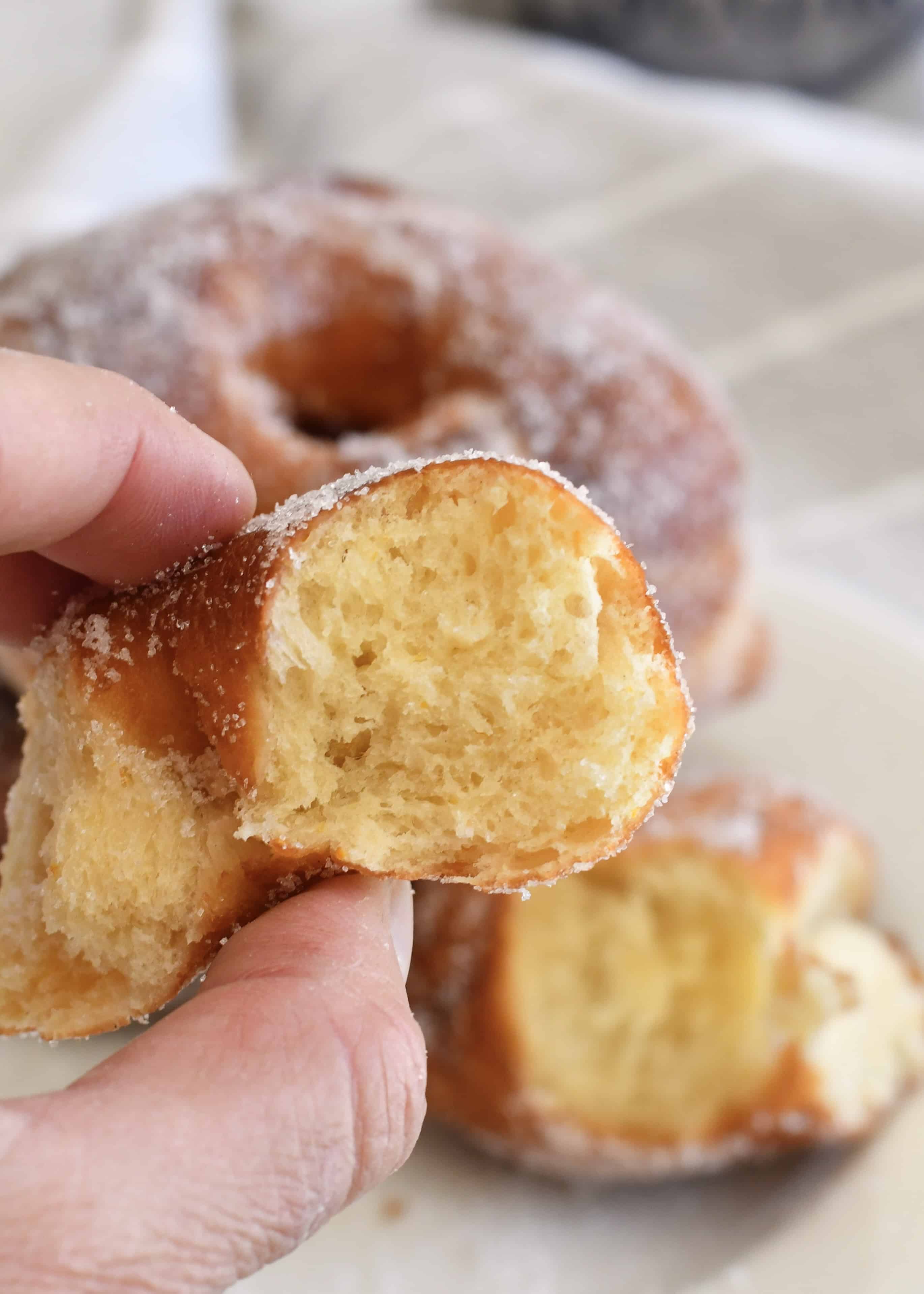 Graffe, also called graffette or ciambelle based on the region of Italy where they are found, are so good that you can find them not just this season, but all year around in most coffee shops everywhere in Italy.

Graffe, just like donuts, are generally served for breakfast or mid morning snack next to a hot espresso. 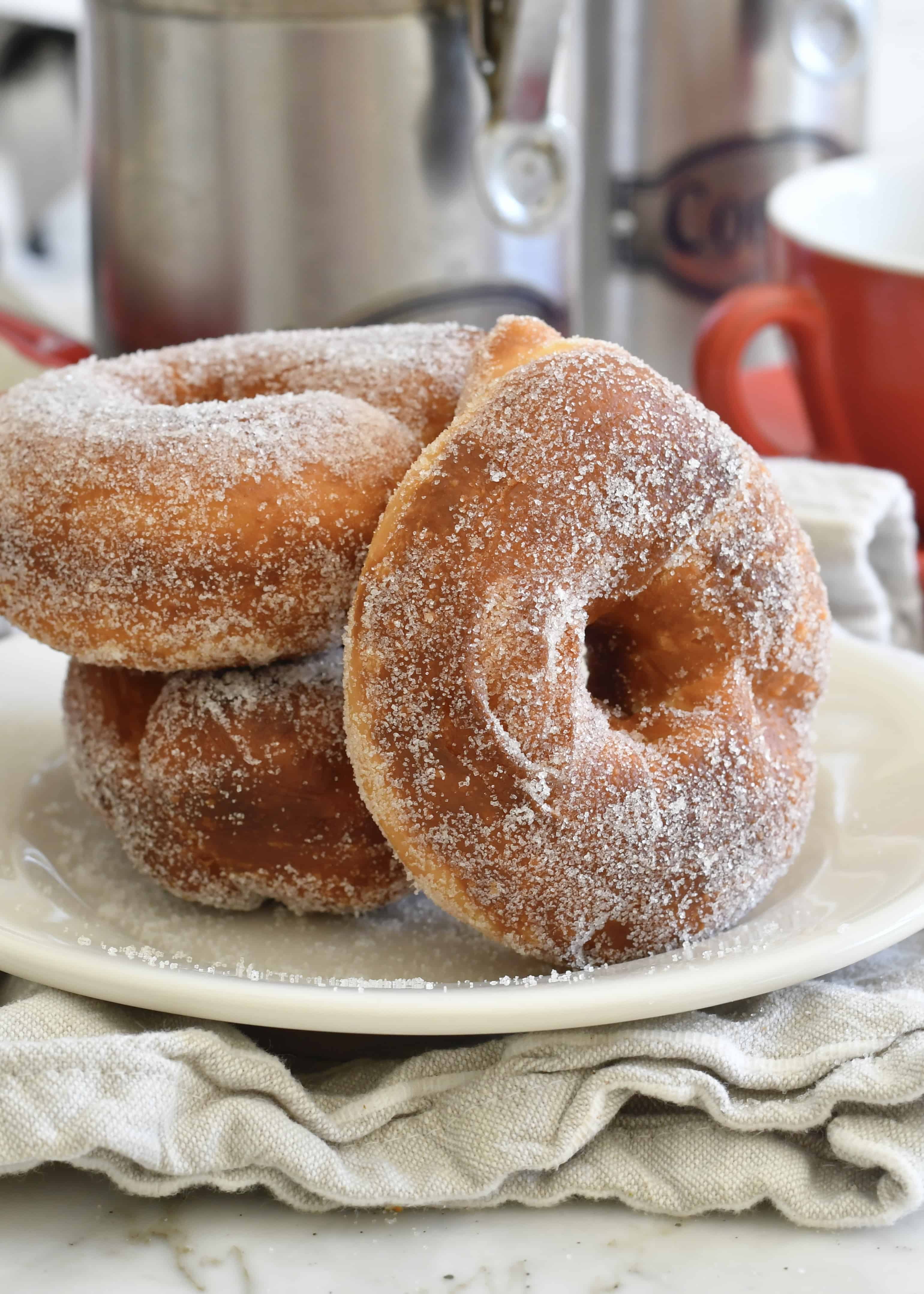 Some recipes for graffe ask for potatoes in the dough, but I believe that originally they are made without, like in the recipe I’m sharing with you today.

Without potatoes in the dough, graffe turn out lighter and more airy. And just as delicious! 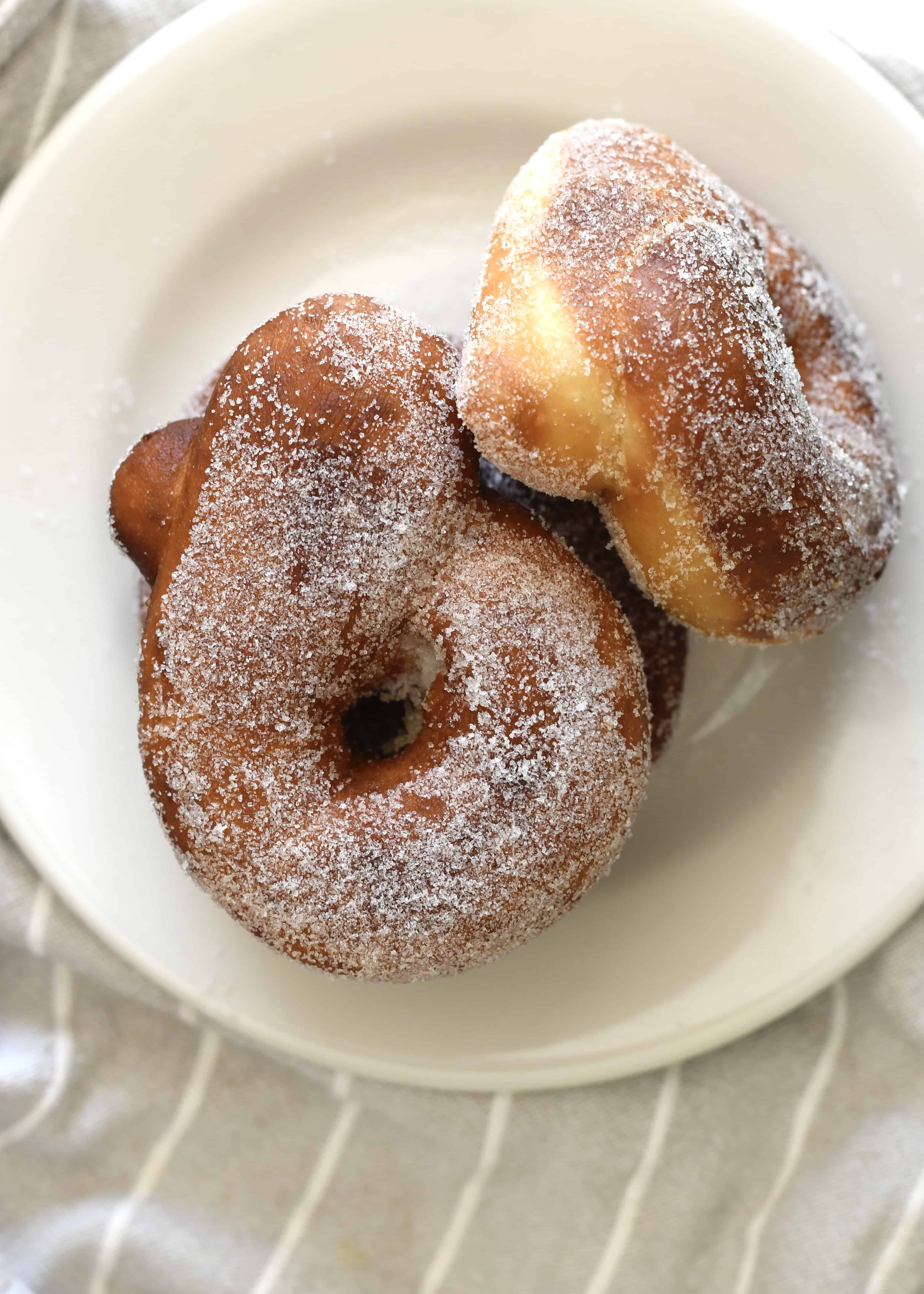 If you have a stand mixer making the dough for these giraffe is quite  simple. If you don’t have one, you can still do the recipe (by hand or hand mixer) but it just takes a bit more time to mix and knead.

For this recipe: add all the dough ingredients with the exception of salt and butter that is added at the end, and let the mixer do all the work. 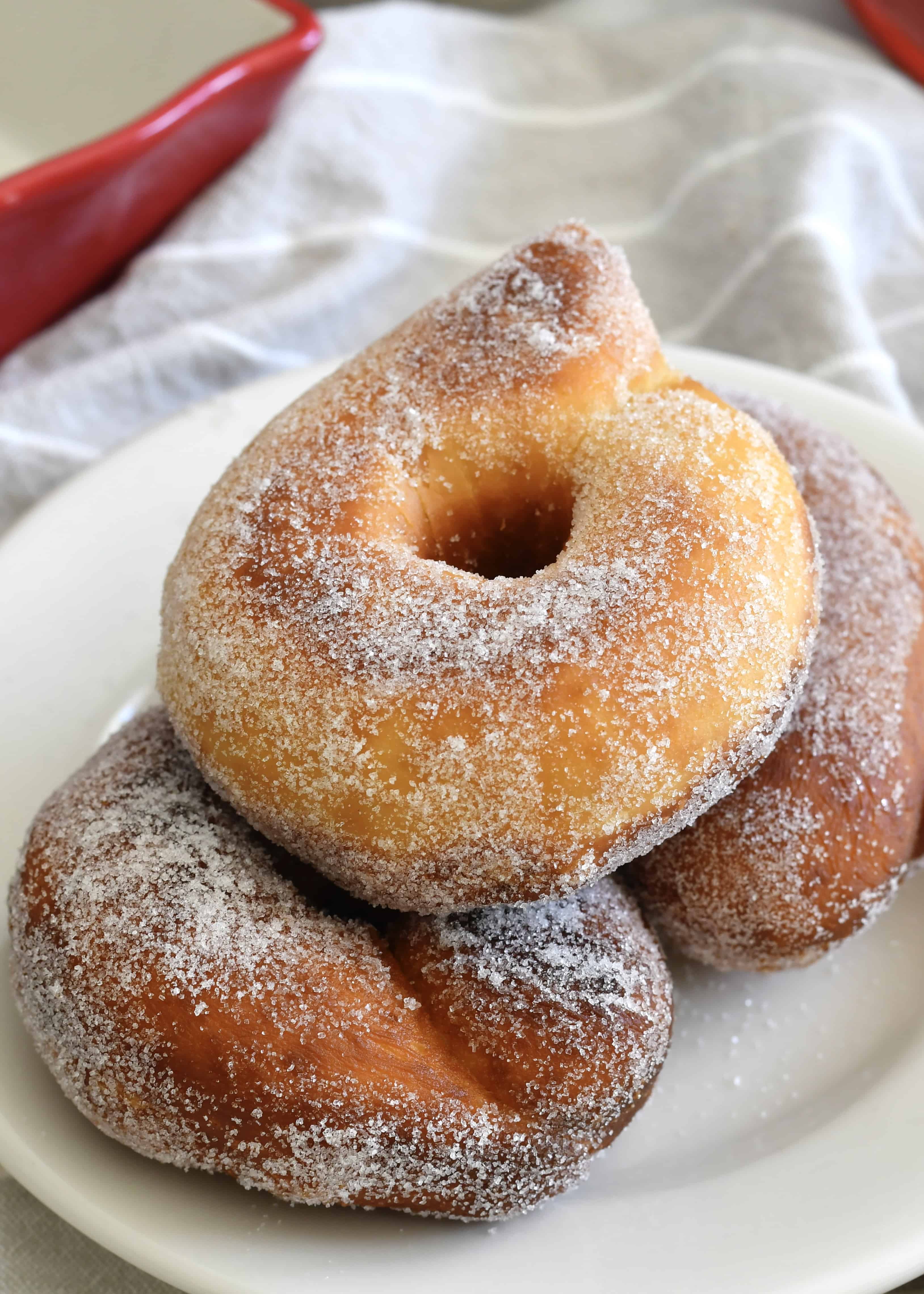 The secret to these light and airy donuts is to give plenty of time for the  the dough to rise. First when you make the dough and a second rise when you shape into donuts.

I left my dough rise for a little over two hours in the oven (turned off!) with the light on, covered with a kitchen towel, so it’s warm and cozy.

The ideal temperature to make the dough rise is 70-82F. For colder temperature you will need a little longer for the dough to double in size. 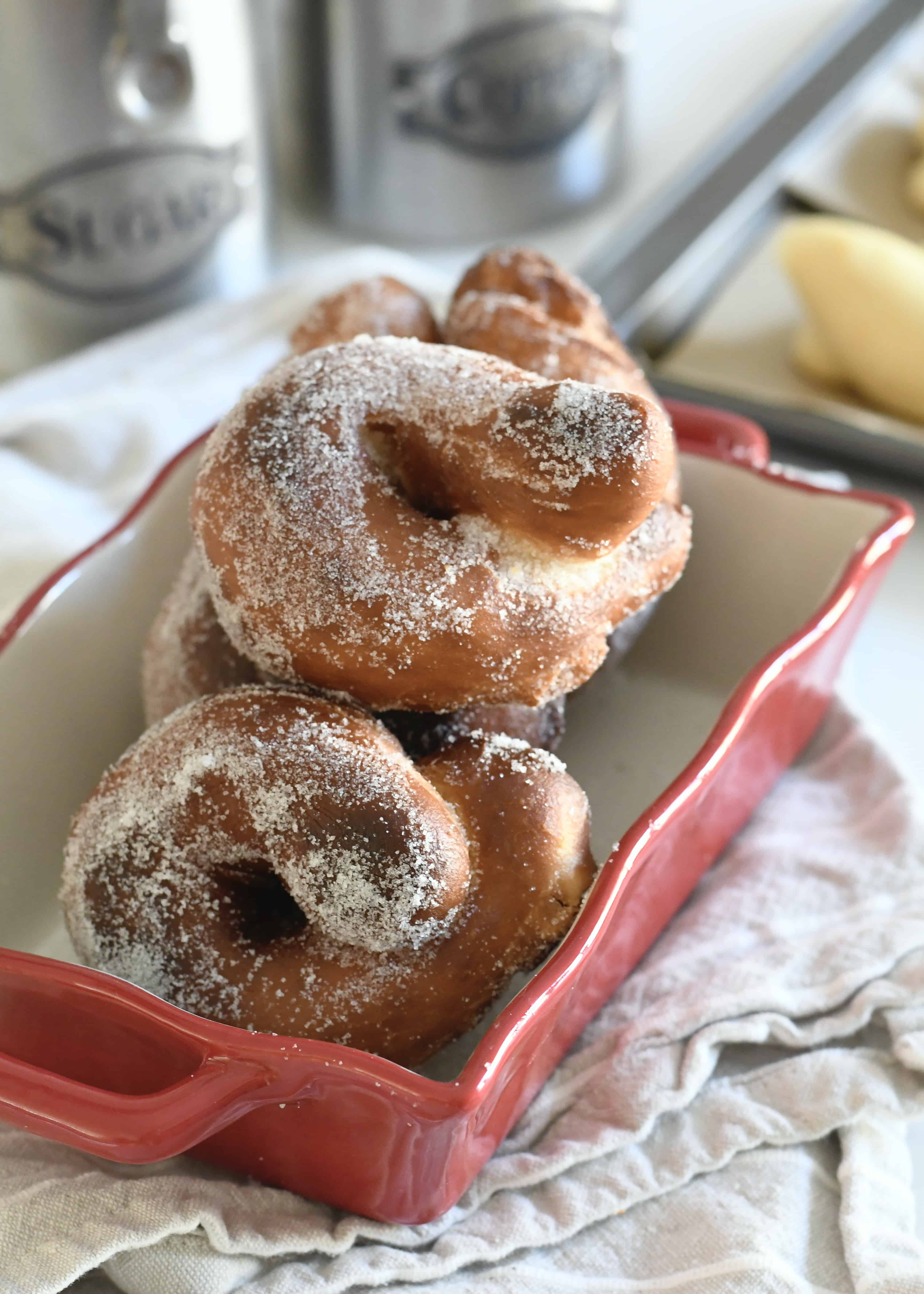 Divide the dough  into 12 balls, each should be about 75 gr. If you have a scale you can weight them out so they will all have the same size.

Roll each into a ball and then into a log. You can shape these in perfectly round donuts, or like I did and make  graffe “intrecciate”. 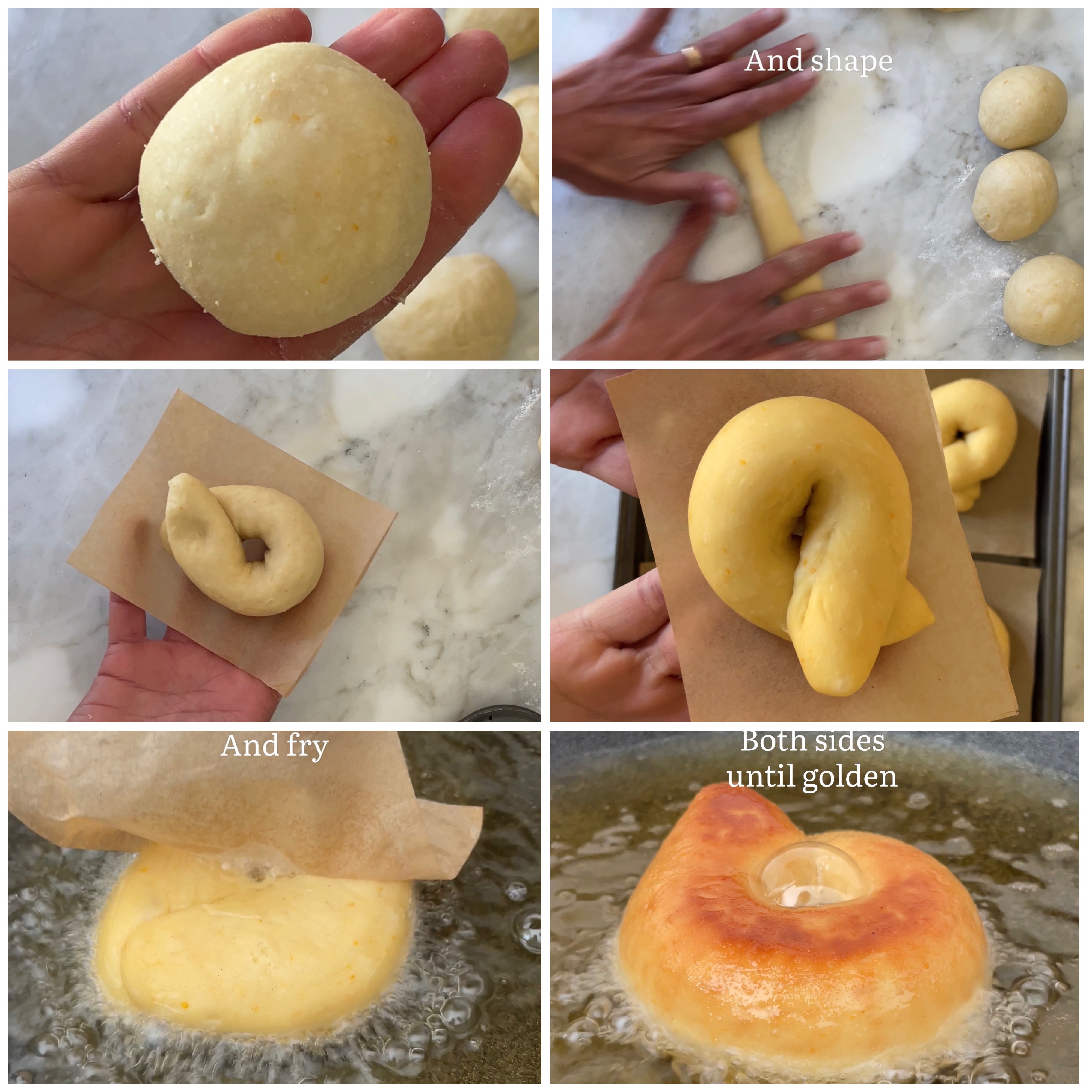 Place the donuts onto small squares of parchment paper. Each square a little bigger than the graffe.

Cutting the paper into smaller rectangles will be useful when frying. It will be easier to have each graffe on its own piece of paper  to transfer into the hot oil without ruining the shape of the donuts. 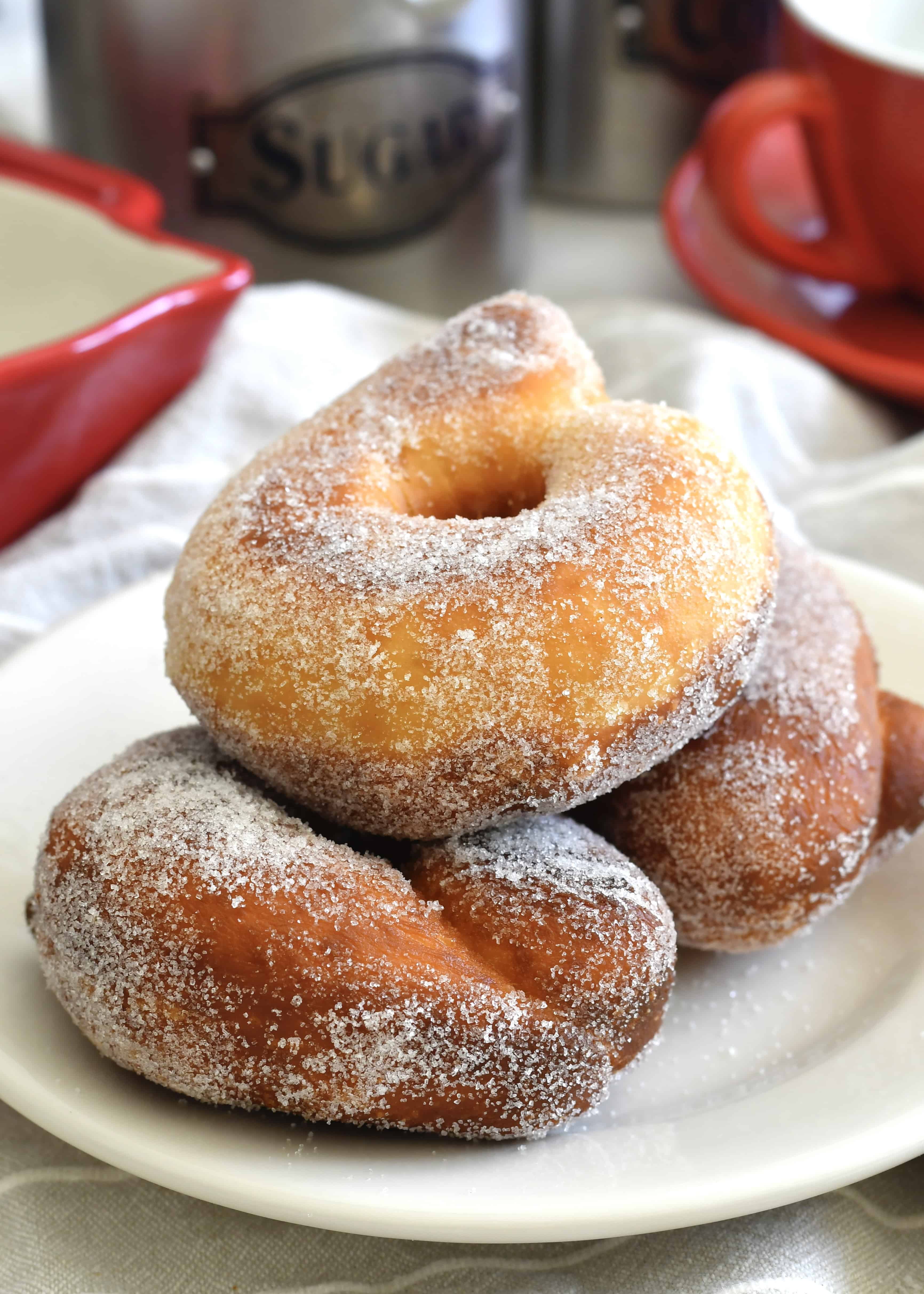 Frying in the hot oil will only take around one minute on each side. Don’t crowd the pan, just cook 2 or 4 at a time, based on the size of your frying pan.

In the dough I use a tablespoon of rum  (substitute with limoncello or similar) which will make the donuts absorb less oil when frying. Did you know this trick?!? 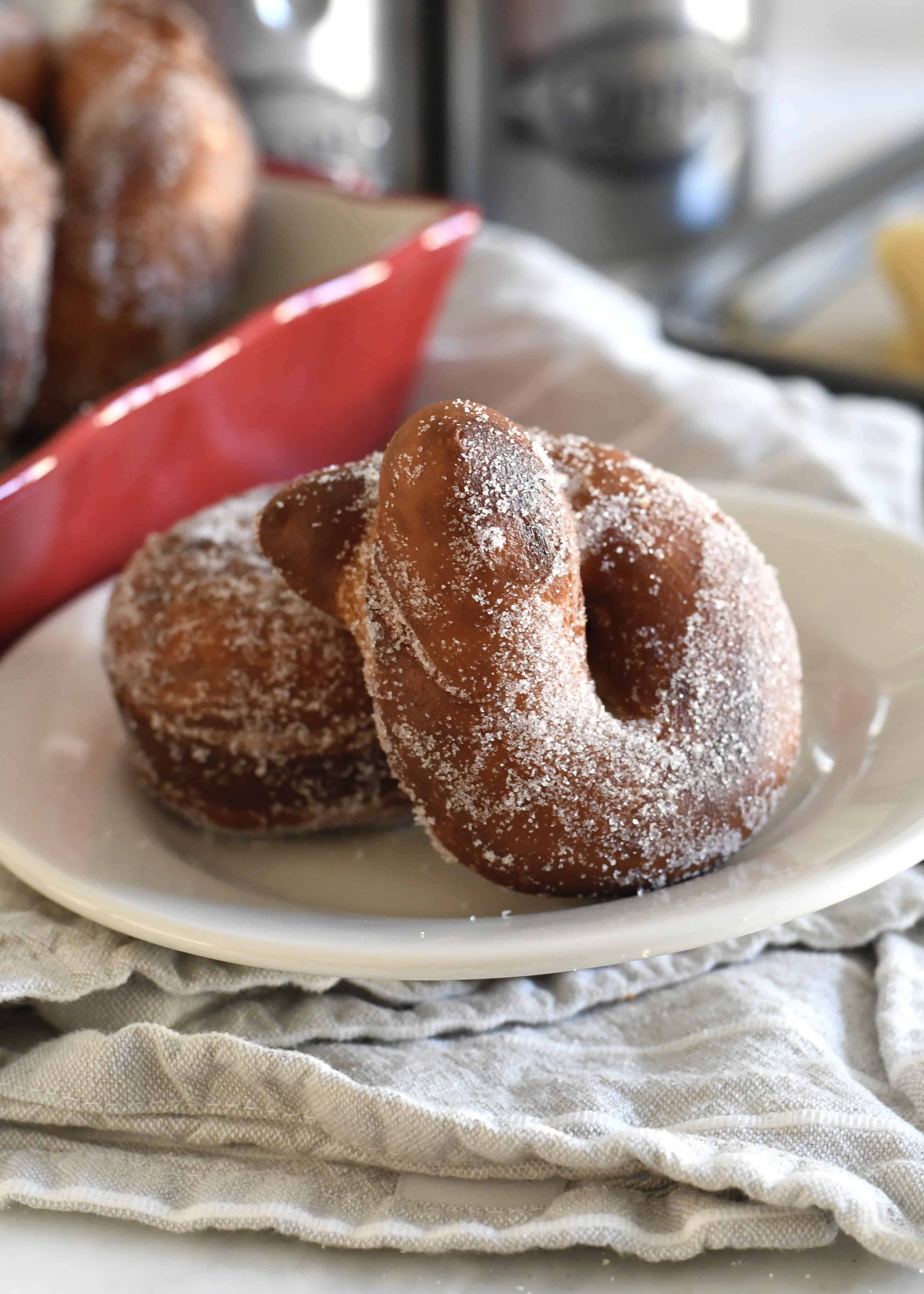 Drain on paper towel, roll in sugar when still hot and devour as soon as possible!

NOTE: these are best eaten as soon as they are cooked. If you make extra dough, simply store it in the refrigerator covered in plastic wrap until ready to fry. Leave at room temperature for at least one hour before frying.