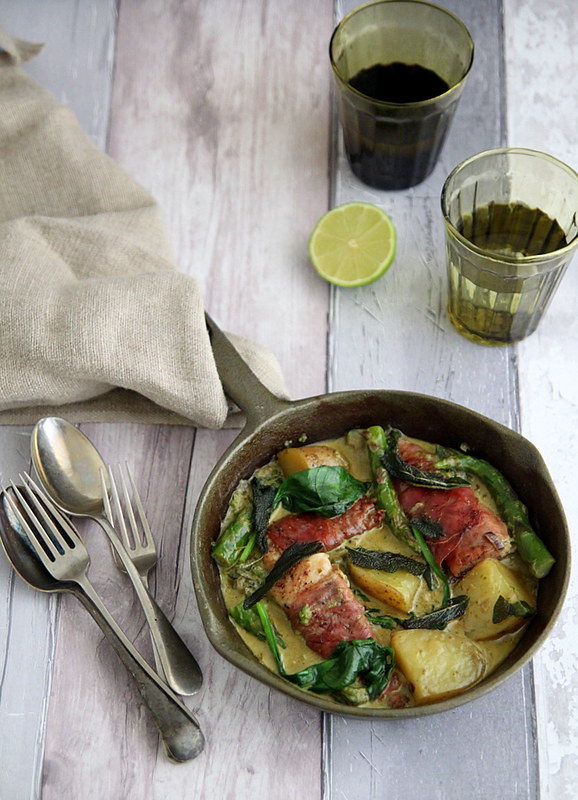 Last week I attended a cooking session hosted by The Consorzio del Proscuito di Parma at the Underground Cookery School. It was a day the tube strike was on and the Underground cookery school being really ‘underground,’ it was a bit of a feat to get there and also to find the place. But one glug of the chilled Processo, on arrival and I was ready to tackle the evening.

We are big fans of cured meat and I even cook with it once in a while. My asparagus wrapped in Parma Ham is a hit at parties and the simple Parma Ham with mayo on toast is a regular at ours. Did you know that by law Parma Ham can only be produced in the Parma region using pigs born and bred in Italy? I had absolutely no idea. I also didn’t know they were low in cholesterol and high in proteins..well, am I glad or what that I was invited to attend the hands-on cookery class with Parma Ham as the hero.

So after we were segregated into groups, we got around to our tasks. First up was making our own pasta. GULP! I’ve never done that before and although the kneading and mixing was not really new to me, the pasta maker did intimidate me a bit. Luckily, our chef was very patient and helpful and he guided us towards making fresh tagliatelle. The pasta maker did prove a bit difficult to handle in the beginning, but I soon got the hang of it and it ended up being a fun exercise. 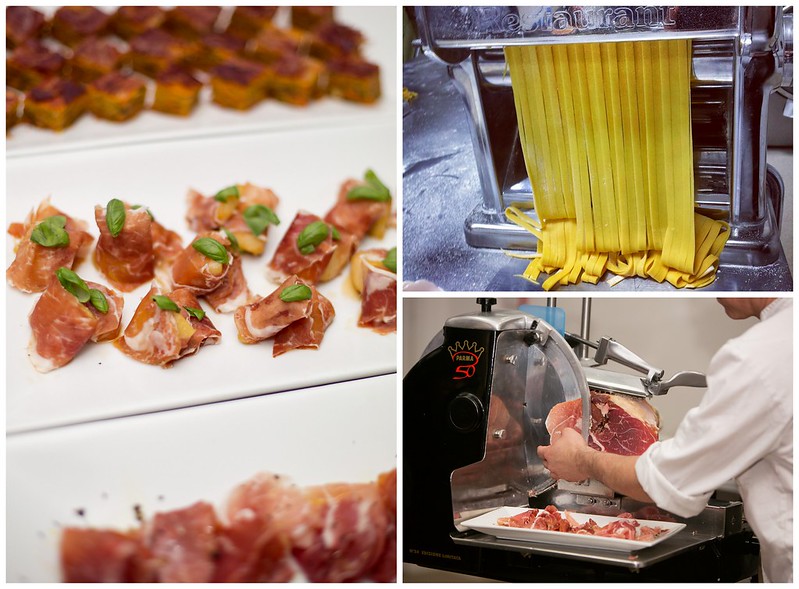 After the strands were hung out to dry, we moved on to getting dessert done. A stiff meringue was whipped and baked and the filling, some gorgeously tasty raspberry coulis was whisked with Chantilly cream and made into a roulade. How the Parma Ham was going to be incorporated into it was still a mystery. The final bit of the session was learning how to separate the legs, thighs and breast from a whole chicken (believe it or not, the first time I’ve ever done that) and then fill the breasts with a tarragon-cream cheese mix, wrap them in Parma Ham and baked.

We took our place at the table while the food was being plated and we chatted with fellow food bloggers over some delicious wine. First course was the tagliatelle we made, tossed with black pepper and truffle oil and topped with a generous sprinkling of Parma Ham and Parmigiano Reggiano. It tasted divine. Main course was the stuffed chicken wrapped in Parma Ham, fried to get the outside crisp, and then baked till done. This was served on a salad of new potatoes, spring onions, cress and purple sprouting broccoli. I loved how the dish looked and ate as much as I could, but was too full to finish the whole thing. I’m not a chicken breast fan, but this was nicely moist and not stringy and dry like other preparations. The grand finale, and perhaps my favourite was the dessert- meringue roulade with candied Parma Ham. This was mindlblowing good. I mean I would have never thought of adding parma Ham to the dessert, but this was really good. The salt for the ham went very well with the sweetness from the roulade and although I was terribly full, I ate the entire thing without flinching.

The evening ended with a nice cup of coffee and we were sent away with a goodie bag full of information and samples. With that I decided to make this fish wrapped in Parma Ham- my take on the main course- and threw in some veggies and a sauce to make a meal of it.

Serves 2 as part of main meal 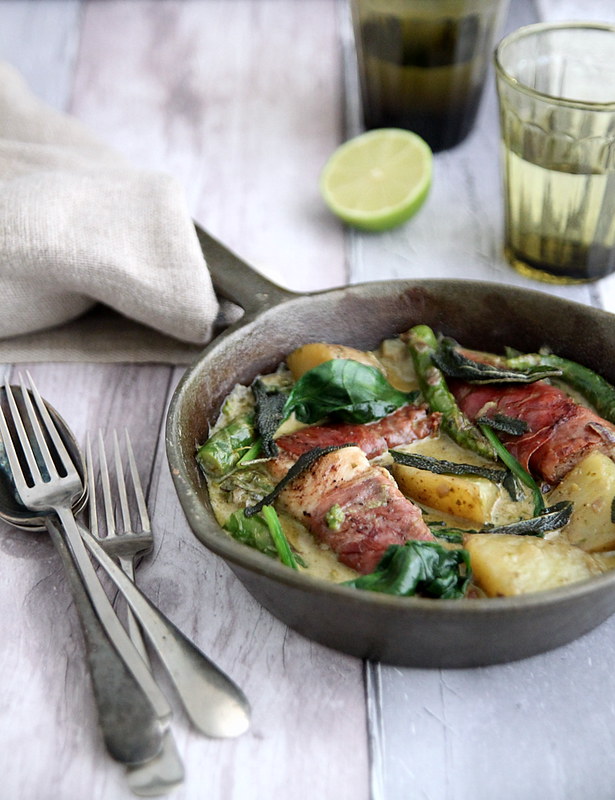 Clean the fish, slice into smaller portions if they are too long and season well with salt and pepper.

Separate the Parma Ham slices and lay flat on a chopping board or plate.

Place the fish slice on top and roll tightly. Use more than one slice of ham if needed. Keep aside.

Boil the potatoes and asparagus till done. Drain and keep aside.

Melt the butter in a large frying pan and when hot, fry the sage leaves till crisp.

Remove with a slotted spoon and drain on kitchen towels.

Into the same pan add the wrapped fish and fry on all sides till done.

Make sure you dont over cook this, or it will turn touch. Around 3 minutes on each side should be good if the fish is really fleshy.

Drain on paper towels and keep aside. 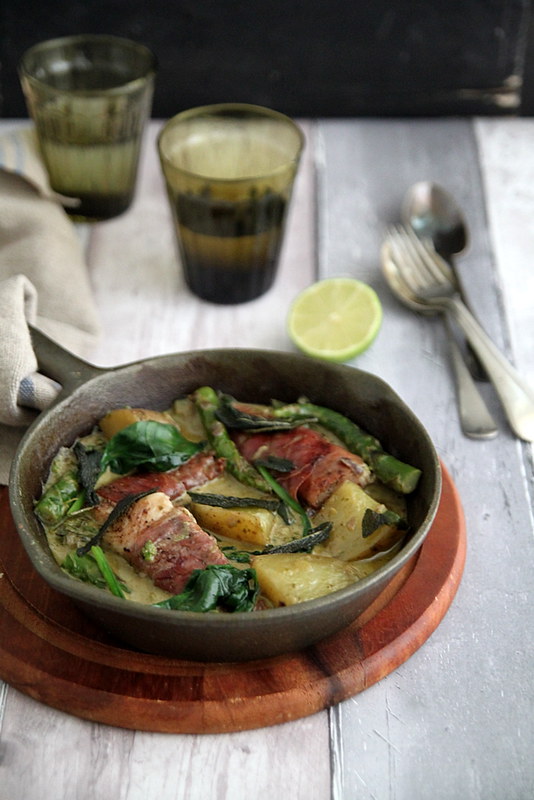 Add some more oil into the same pan if needed and saute the onions till caramelised, around 5 minutes on medium heat.

Add the pesto and mix it all in.

Throw in the cooked potatoes, asparagus and spinach, mix it all in.

Add salt and pepper to season.

Pour in around 1/4 cup of water and let it come to a simmer.

Reduce heat, pour in the cream and mix well.

Add the fish, gently stir and cook closed for another 5 minutes, just so the fish takes in some of the pesto flavour.

Finally garnish with the fried sage leaves and serve with some crusty bread.

Notes: Follow the same method for chicken breast, but remember, cooking time will be longer.

The pesto flavour just comes through, if you want it stronger, add a tsp more

With thanks to The Consorzio del Proscuito di Parma for the event invite.