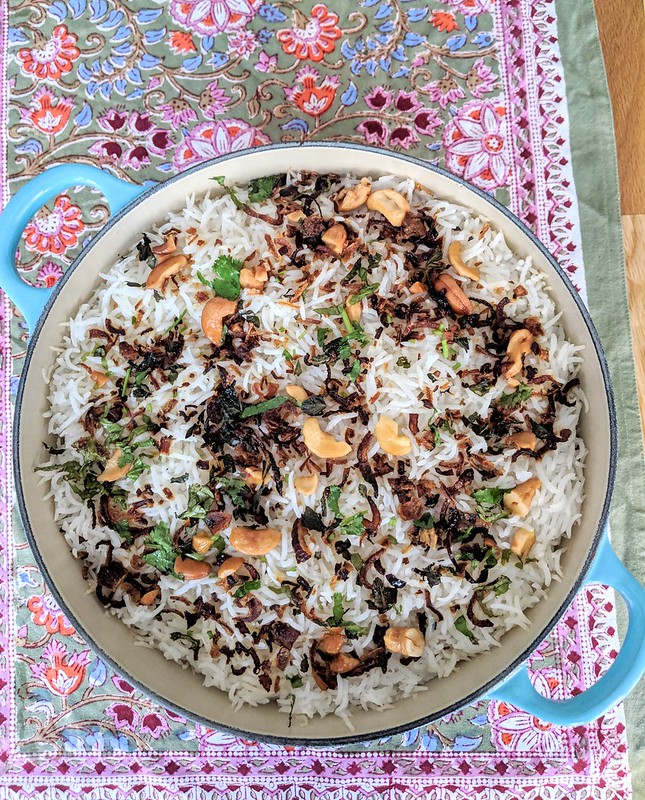 Fish- 500 gms (any firm, fleshy fish like salmon, tilapia can be used, but ideally King fish, which is what I’ve used)

Oil- 1 tbsp (use leftover oil from frying the fish)

Green chillies- 2 to 3 (increase as per heat level)

Tomato- 1 1/2 finely chopped (if they are small use two, mine was pretty big)

Water- enough to cook the rice

Ghee- 2 tbsp + enough to fry the cashew and onion 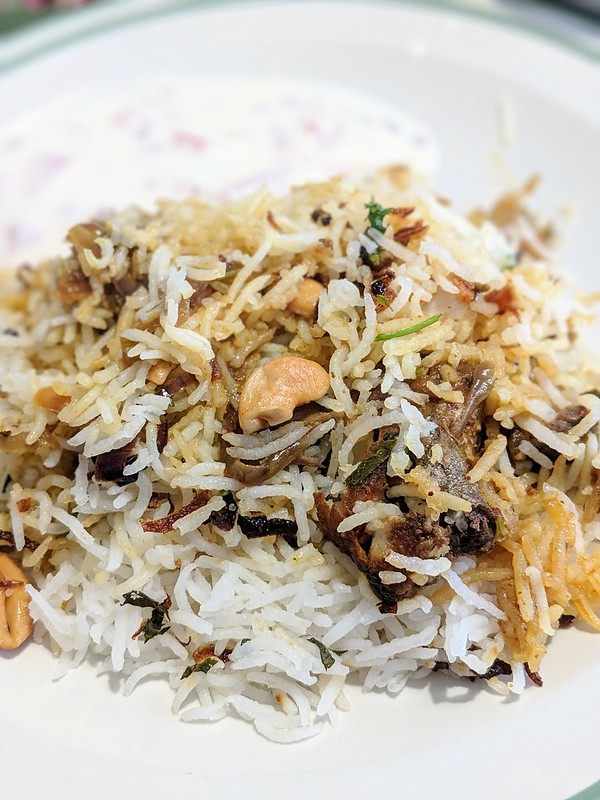 Cut the fish into relatively large slices and wash and clean with salt and vinegar to remove some of the smell.

Marinate with all the ingredients under the marinate section and keep aside for about 20 minutes.

Also wash the rice and soak in water for around 20 minutes.

Crush the ginger, garlic and green chillies in a blender or using a pestle and mortar.

Heat some ghee in a shallow pan and fry the cashew nuts first till golden brown followed by the onions, also to a golden brown and drain on to paper towels. Be careful to not burn them. (I used red onions which is why they look almost black, but they are not burnt 🙂

Heat oil in a pan and shallow fry the fish, in batches if needed. You dont need to completely cook the fish, just crisp them on the outside. Drain on to paper towel and keep aside.

Heat ghee and some of the oil from frying the fish in a large pan.

Saute the onions with a little bit of salt, till they turn light golden. Make sure you cook the onions properly or they will turn the curry sweet.

In goes the turmeric, chilli, garam masala, pepper powder and salt. Cook them for a couple of minutes and add a dash of water if you feel the masala is dry.

Stir in the chopped tomatoes, 1/4 cup water and cook it covered till the oil slightly starts to appear around the edges.

in goes the coriander and mint leaves, mix well.

Add the yoghurt and mix it all well.

Add the coconut milk and around 1/2 cup water and mix very well. Check salt and add if needed.

Slowly add the fish pieces and cover with the masala as carefully as possible without breaking the fish. Add a bit more water if you feel that the masala is too thick.

Cook for about 5 to 6 minutes uncovered, till the gravy has thickened and the fish pieces are smothered all over the fish.

Keep this masala aside while you sort out the rice.

While the fish is cooking in the masala, put enough water to boil along with the whole spices.

The pot used should be big enough and water quantity quite a bit.

Add salt in such a way that the water tastes salty, only then will the rice taste nice.

Once the water comes to a rolling boil, pour in the lemon juice and then carefully add the drained rice into it. Mix well.

Now this is the tricky part- cooking the rice till its only 3/4th done.

With the basmati rice i used, i got to this stage at 8 minutes. Do not over cook the rice and then it turns into a mushy biryani.

Add the ghee and give a good stir and then drain.

What i did was instead of draining it into the colander, i used a sieve to scoop the rice out of the water and put into the colander so there wasnt a lot of water that needed to be drained as i was time constrained.

Assembly:
Generously grease a large pan with ghee, up the sides as well and place a layer of the fish and masala (as even as possible).
Top with half the rice, again as evenly as possible and sprinkle half of the coconut milk on the rice.
Sprinkle half the mint and coriander leaves and the fried cashew and onion over the rice and finally drizzle half the ghee as well.
Top with the remaining fish and masala followed by rice layer with all the leftover toppings.
Cover with foil and close with a tight fitting lid.
You can either do the usual dum process on the stove top for about 20-25 minutes on low heat or do it in the oven, which is what i did, at 180c for 25 minutes. (While the rice is draining, you can preheat the oven)
Once done, keep to slightly cool for about 10 minutes and then dig in.

Notes: I made the fish masala the previous day and that made life so much easier. I also felt that the masalas were caught on to the fish much better.
I used my Le Creuset for the entire process and it was a breeze, it went from stove top to oven to table t refrigerator.