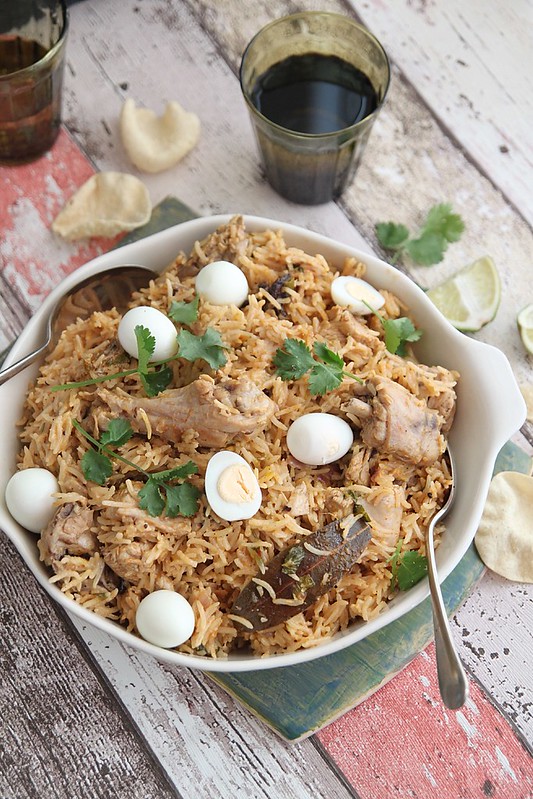 I am not one to adhere to new year resolutions and so i stopped taking them. But last year i decided I wanted to go organic and am pretty proud of the fact that we did manage to do that with whatever options we had. The grocery bills did go through the roof, and there are still some arguments about the pros and cons of going organic, but i think its been a good decision and we are still sticking to it. This year my decision is to eliminate plastic from my life. Replacing all my storage containers and the like tops the list.

This year also started off with me deciding to get my priorities right. (Ro will roll on the floor laughing if he hears this). First on the list was to take up a new hobby. I am still working on it and I have so much negative energy in me right now, i should channel it all in the right direction. I turn a year older in the next couple of weeks and suddenly out of nowhere I’ve started to panic. It kind of happens every year but this time my fears are different. I’m getting older (and not in a wise , I’m rocking the 30’s sort of way), I’m wondering if I’m taking the right decisions, whether I’d regret those decisions and most of all if Ro would resent me later for those decisions. Anyways, rant over, lets talk about something that cheers everyone up.. Food! 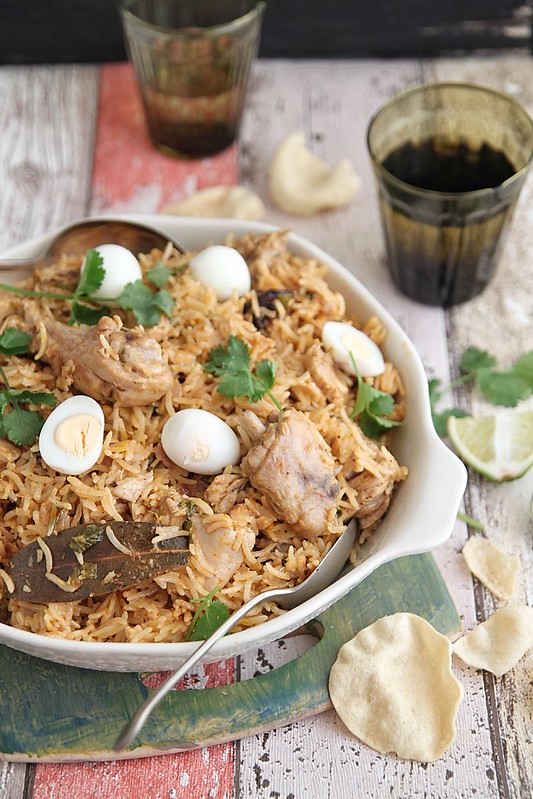 Tilda has been my go to brand for basmati rice. I had some excellent biryani at a restaurant called Kadiri’s in North London and we got talking and they gave me a couple of sachets of their excellent biryani rice to sample. And no surprises there, it was of course this special extra long rice called golden Sella from Tilda. I made a batch of biryani with that rice and omg it was the best ever. The rice is so so fragrant, super long, and what we realised is it absorbs the flavour much much more strongly than any other rice we’ve used. After my sachets were used up i scouted around for that exact variety but couldn’t find it anywhere. Tilda does have the Grand Biryani rice in a similar pack but its not the same.

I was not willing to let go of the rice like that so I sent Tilda a tweet and after a couple of emails they were able to find the rice and they were kind enough to send me a bag to cook with. I have been so stingy with it, and have only managed to make this zafrani pulao and a small batch of plain rice to show you how long they are. I am on a quest to collect recipes and make the best biryani’s and blog it and also to find some of the best biryanis in London. This zafrani (saffron) pulao with chicken added to it, is a close substitute for biryani and much easier. A lot of cream and milk is used and like i said, the rice does a great job by absorbing all the fab flavours. Its a very flavourful one pot meal. 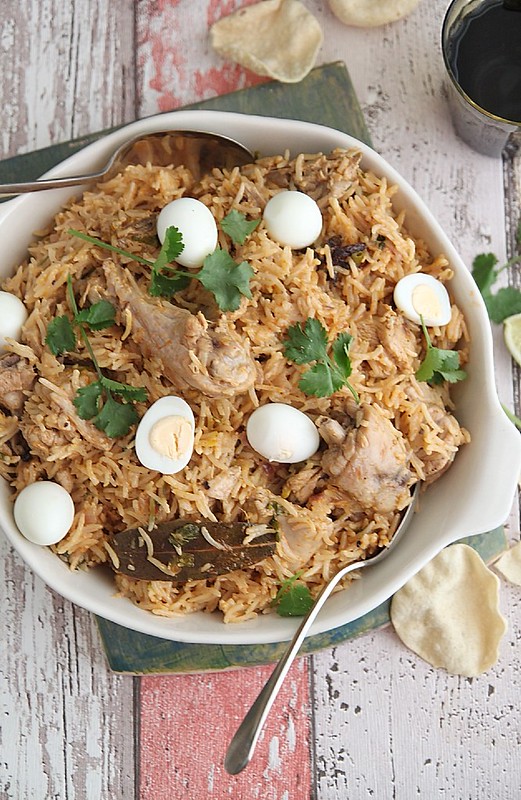 Basmati rice- 2 cups, washed and soaked in water for half an hour

Eggs- 3 to 4, hard boiled and sliced in half (I used 6 quails eggs, cos i had them lying around , yes i know, I have a thing for quails eggs)

Chicken- 1kg, with bone and cut into medium size pieces 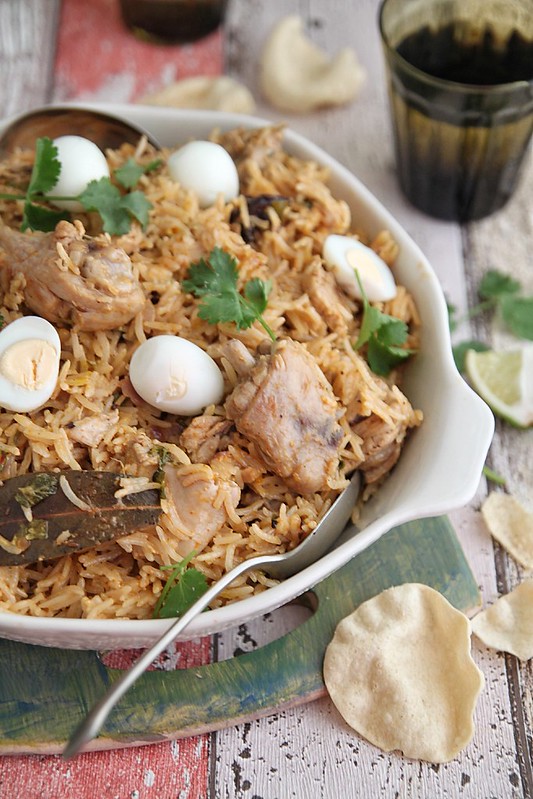 Marinate the chicken with all the ingredients mentioned.

Warm the milk in a bowl and soak the saffron strands in it for a while.

Into it add the cream, coriander and mint leaves, give a good mix and keep ready.

Melt the ghee in a big chefs pan  on medium heat, and throw in all the spices.

Once the aroma sets in, throw in the onions and sauté till they turn golden brown.

Add the garam masala and chilli powder and mix it all in.

Pour in the saffron infused mix followed by the marinated chicken and give it a good stir. make sure everything is nicely mixed.

Cook the chicken till about 3/4th done, or if you are doubtful like me, cook it all the way through, stirring in between.

Add the rice, boiling water and lemon juice, and enough salt (if needed). Stir it in well.

Once it boils, reduce heat to the lowest, cover the pan with a tight fitting lid and cook till the rice is done. This would take around 15 to 18 minutes. 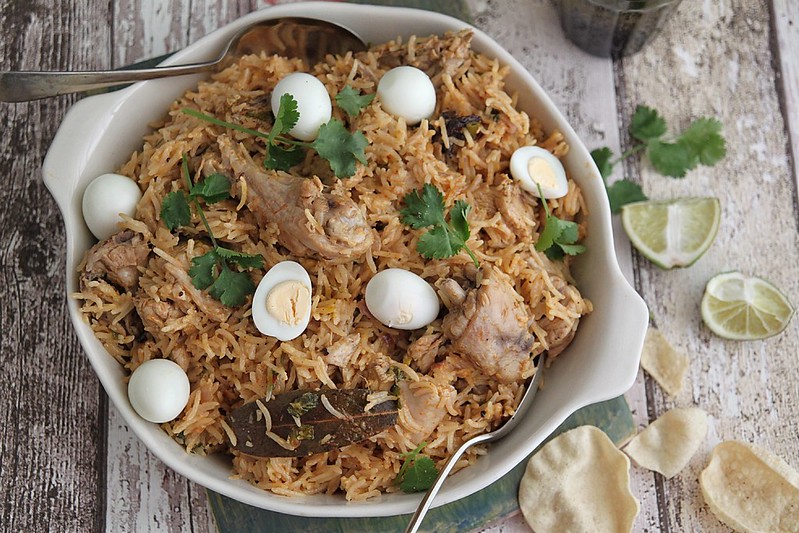 Once the rice is cooked, take it off heat and leave aside for another 10 minutes or so, after which you can scoop it on to a serving plate, garnish with coriander leaves and eggs.
Serve with raita.

Notes: Zafrani pulao is traditionally not made with chicken, so omit the meat for a meatless version.

The recipe did not specify what cream was to be used and i ended up using double cream which was a bad idea. So use single cream like I’ve mentioned in the recipe.
Use 2 cups of milk for a lighter version
The left over pulao freezes really well for a couple of weeks. I thaw it at room temperature and then steam it for best results.


I was not asked by Tilda to do this project, but thanks to Tilda for providing me the rice for this #biryaniquest