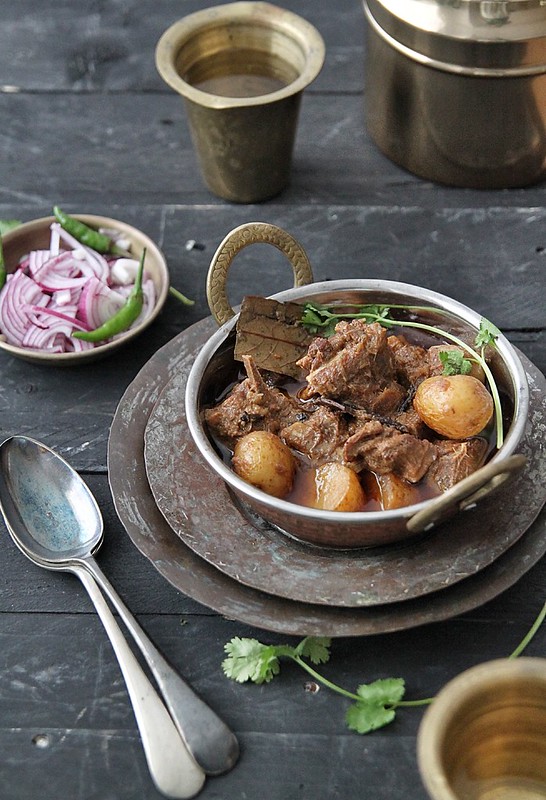 Right, so 3 months into 2016 and i muster up the effort to do a blog post. Well, i have my excuses. We moved into our new home end of December and then pushed off to India for a month. Came back to a house filled with boxes, no storage, no curtains and no enthusiasm. I should have been all thrilled and excited considering i was going to set up my new home but the constant arguments with Ro regarding what goes where, which colours suit better, why the earth is round etc etc made me lose interest in this whole scenario. So i just got on with life and left all my baggage right there (pun intended!)

I think he kind of sensed the lack of interest, and pulled back a bit which is when i got in and absolutely took advantage. But even then i realised i kept asking him for opinions which in turn lead to more fights. Nisha, haven’t you heard of something called taking decisions on your own??? Apparently not!! Anyways, I still have boxes strewn all over the floor, but its a bit more bearable now. I may have my own house, but tell me i can go back to Greenwich any day and I’d leave in a heart beat. I am so not cut out for suburban life and damn the owners who decided to sell that beautiful, beautiful apartment we spent 8 years in. (shedding a lil tear now).

The internet!!!! Since its a new built, internet has not been sorted out. We have been given a temporary solution and we seem to run out of the given allowance within a week. So uploading, editing pictures is an issue. This actually is a very lame excuse because im still on limited data and i managed a blog post! 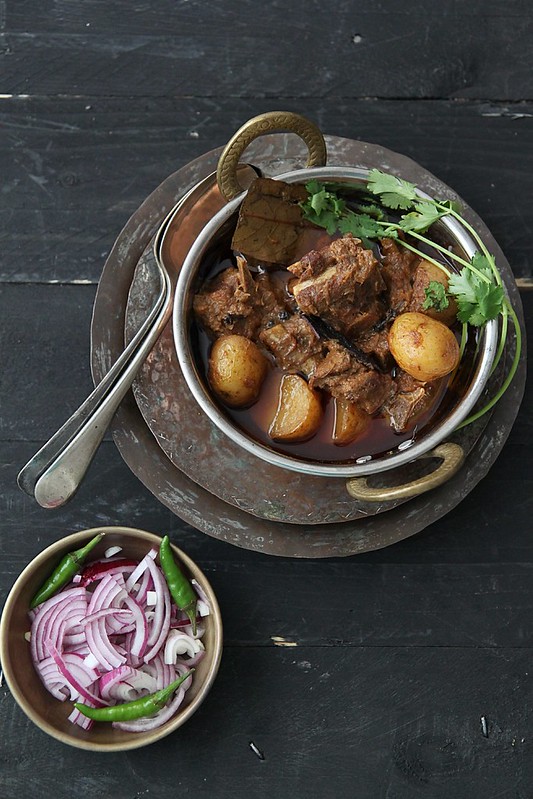 Then there is Chaiparty, which is doing pretty well and keeping us all occupied. We had 2 Bengali feasts back to back because people were on wait list and its the first time i actually got to taste some of the traditional Bong food. S was the main chef and G and I were sous chefs, obeying her orders and trying hard to not goof up. I was so inspired by all that Bong-ness, I decided to give the mutton curry a go.

In spite of S giving me a run down of the procedure and the recipe, I still had to google a recipe and since it was my first time, decided to just stick to it. I’m going to write down her grandma’s mutton curry recipe (which was a big hit at our supper club BTW) and make it the next time. We had this with steamed white rice, that’s it! I had to give Ro the stare when he asked me ‘aren’t there any veggies to go with it.’ Like seriously, after slow cooking the damn thing for close to an hour, he wants a side dish!!!

It was a very mutton-y curry, especially the gravy, but that could be because of the type of meat i got. The chunks of potato are simply fab and the curry tastes even better the next day. I am assuming this is a variation of the mutton curry known to Bengali households, and what they call kosha mangsho. Either ways, I’m pretty happy with the way it turned out. 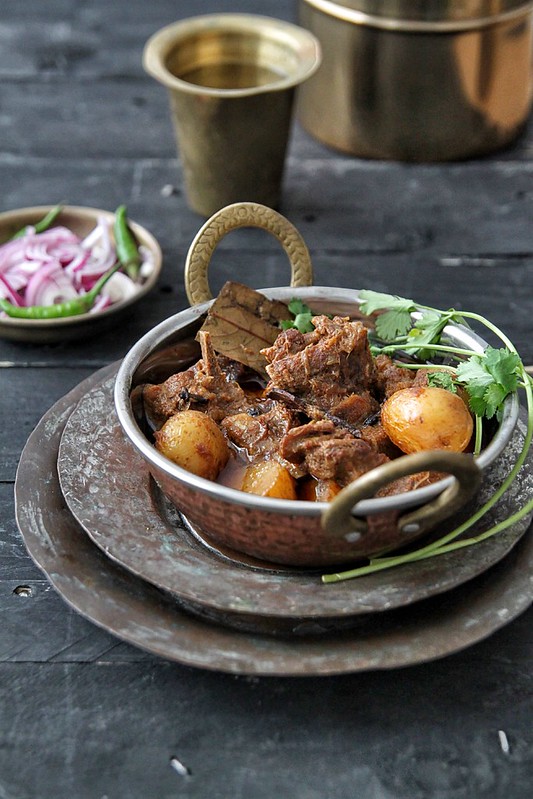 Mutton- 500gms (with bone and cut into small pieces)

Potatoes- 3 medium ones, peeled and cut into big chunks 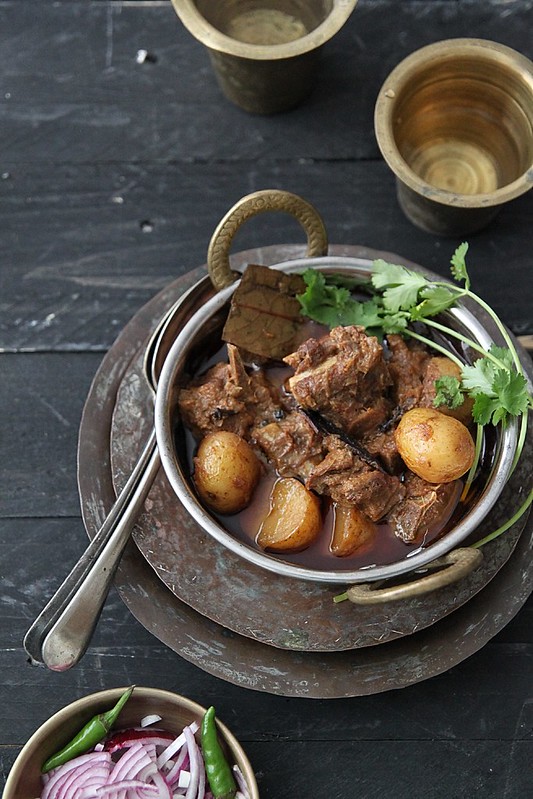 Marinate the mutton with the 9 ingredients below it (using only 3 tbsp of the oil).

Cover with cling film and marinate it in the refrigerator, overnight for best results, or at least for a minimum of 3 to 4 hrs.

Bring to room temperature before cooking.

In a pressure cooker heat the remaining 3 tbsp of oil and fry the potatoes they they brown around the edges. Drain on to paper towels.

Add the sugar and let it caramelise.

Throw in the onions and on medium heat cook till they turn a golden brown. This would take around 15 minutes or so.

Add the marinated mutton, mix it together with the onions and cook on medium-high heat till you see the water drying and the oil separating.

This process can take close to an hour so make sure you keep checking the meat in between and scraping off the base and edges so that the meat doesn’t burn.

Once the meat becomes a dark brown in colour, and mostly dryish in consistency, add 1 cup warm water, the fried potatoes, salt to taste and cover and pressure cook for about 2 to 3 whistles or till the meat is completely cooked.

Serve hot with steamed rice or luchi- a poori like bread. 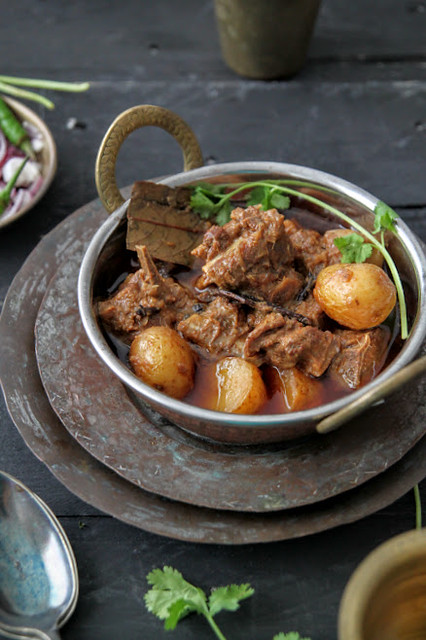 Notes: It is originally made with mustard oil which imparts a distinct flavour i presume. I didnt have any at hand.

If you don’t own a pressure cooker, continue cooking the meat on medium heat, checking water in between and adding the potato towards the end.

A lot of oil gets released. So on day 2 i drained a bit. Sacrilegious i know!