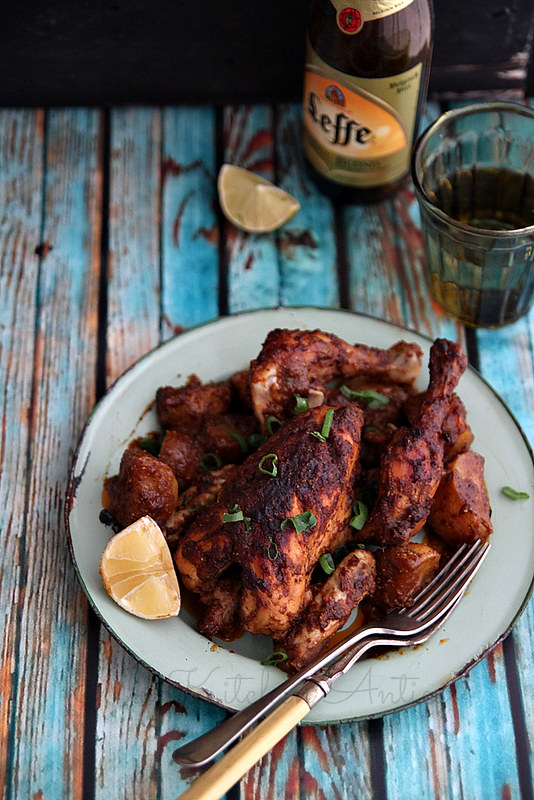 I’m back after a fabulous weekend in Jersey Island with the husband, and the week before, a couple of us girls had taken off to the beautiful Cotswolds. The girls weekend away was so totally worth it, and we had some serious amounts of adventure, to say the least. From non stop gossip sessions, to happy hours at the tiny village we stayed in, to acting silly in the middle of the night, to having a flippin swan torture the daylights out of me, this trip shall never be forgotten. Without having time to get over the Cotswold trip, I packed my bags and joined the husband in the tiny, but gorgeous island of Jersey, 14 miles off the coast of France. We wined and dined in some amazing restaurants, explored the pristine beaches, spa-ed, got tanned and got back last night exhausted. Considering the fact that I had a hectic weekend, this post would not have happened any time now. But I promised a few I’d post this before Easter so they could try it out and I had to keep my word.

So- Murgh Musallam- from what I read up is a Mughlai dish, pretty rich in flavour and absolutely tasty. When Kulsum posted the recipe on her blog, I knew I had to try it. Each time I scouted for a chicken recipe, I’d land on this one, but I somehow thought it was a time-consuming one and left it for a day I was actually enthu to cook. Sadly, that day never came. But now that Easter is just a week away, I thought I should do a roast with an Indian twist and studied Kulsum’s recipe again. Me being the lazy bum, went ahead and followed her recipe, but with the obvious short cuts. I just marinated everything together, added some potatoes and cooked it half on the stove top, and finished it off in the oven. The Gressingham poussins just made it even more easier, and somehow, roasting a whole bird gives it that fancy edge. They are absolutely easy to handle, and since they are small, the masala works its way into the thick breast bits, and takes much lesser time to cook. Gressingham also does duck, turkey, guinea fowl, quail etc, so if you’re up to some experimenting this Easter, you know where to shop.

Add some baby carrots, parsnip, cauliflower etc and it can be an Indo-Western dish for sure. Its seriously tasty, especially the gravy, and the next day I had it with rice, and it was even better. I think traditionally its served on a bed of pulao and stuffed with eggs or something like that, but for me, this totally hit the spot.

Baby potatoes- 6 to 8, quartered or halved depending on size 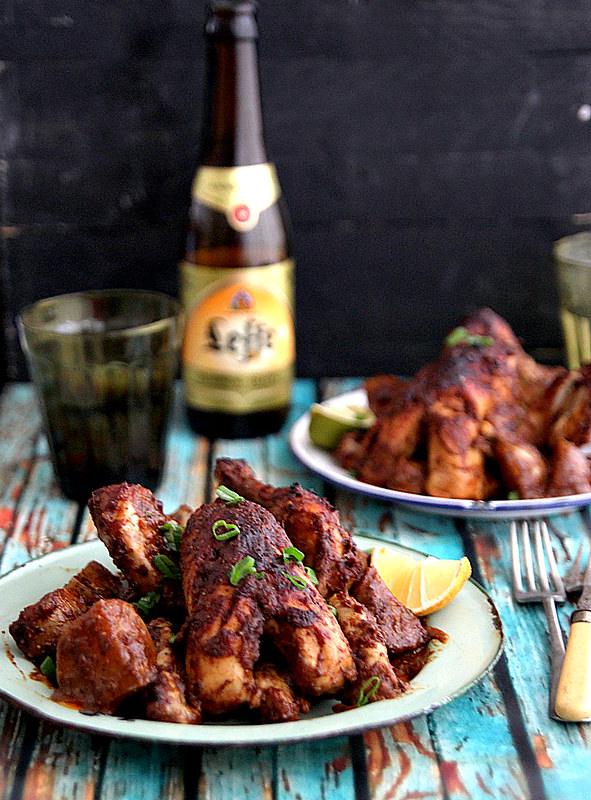 Grind together all the ingredients under the ‘to grind’ section. Transfer to a bowl.

To this, add the ginger and garlic paste, green chillies, tomato paste, yoghurt and salt and mix well to get a thick paste.

Add a few tea spoons of water if you think the mixture is too thick.

Place the poussin’s on a plate and make long insertions on the flesh (for the marinade to seep in).

Generously apply the marinade on to the birds, and also stuff some into the cavity, reserving about 2 tbsp of it for later use.

Cover with cling film and marinate in the refrigerator for at least an hour. I had time, so i kept it in there for about 2 to 3 hours. Best left over night I believe, but who has that sort of time and patience 😉

When ready to cook, heat a deep pot/pan, large enough to fit the 2 birds and pour in the oil and ghee.

When really hot, add the poussins one after the other, and sear on all sides.

You don’t need to cook the chicken here, just need it to be lightly browned all around. Its a bit difficult to move them around, so I used my big kitchen tongs to flip it and such.

Once the chicken is nicely seared on all sides, take them out and drain on paper towels.

Into the oil (add a bit more, if there isn’t much remaining in the pan), add all the remaining marinade. Scrape the bowl clean.

Sauté for a couple of minutes, till the raw smell disappears.

Into the masala add the baby potatoes and fry for about 2 to 3 minutes, making sure the potatoes are well coated in the masala.

Return the poussins back into the pan, adjust the potatoes around them, add about 1/4 cup of water and cover and cook on medium heat.

Keep checking in between to make sure it doesn’t burn and if you feel its getting too dry, then just add more water. I did add a 1/4 cup more.

Keep pouring the gravy on top of the poussins to keep them moist, and also try and stir the potatoes without breaking them.

Once both the potatoes and poussins are cooked (check by inserting a knife into the most thickest part of the bird and if juices run clear, you are good to go), transfer them into a baking dish along with all the gravy/

Grill under the broiler for about 10 minutes, just to crisp the tops. Of course, this step is purely optional.

Once done, take the dish out and let it rest for about 5 minutes, before you attack.

Serve with crusty bread and salad, or even with rice and roti. 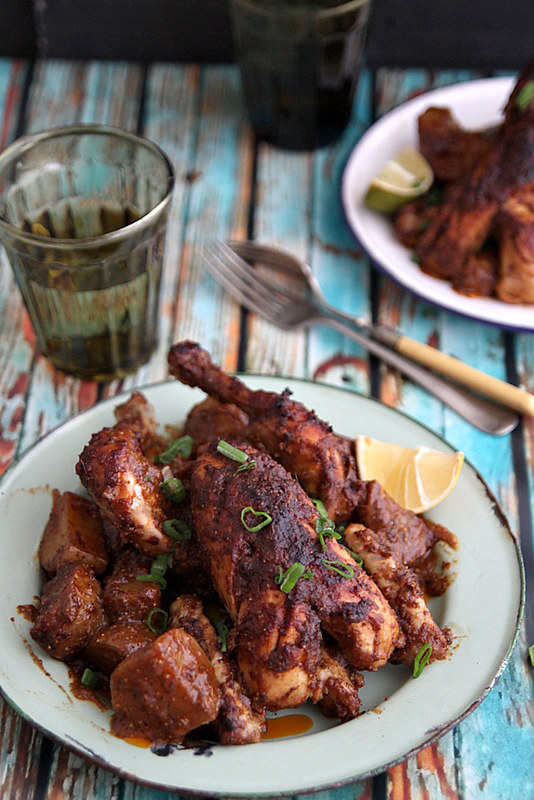 Notes: *The fried onions I used were store bought. If you don’t have that option, then deep fry 2 small red onions till brown and crisp and use that instead. Make sure you don’t burn them, or else they would taste bitter.

Use 2 tbsp vegetable/ olive oil instead of ghee.

You can of course use one chicken instead of two small poussins.