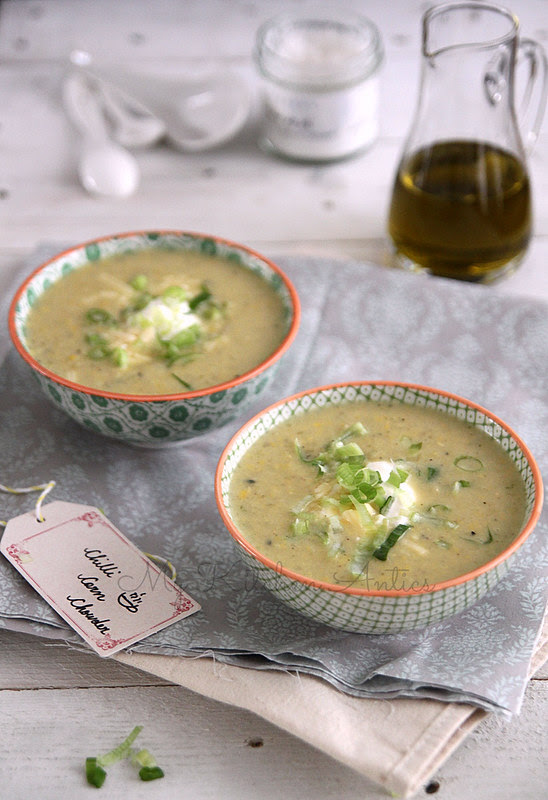 I love Jamie Oliver! Like seriously. I think he’s one of those chefs who you develop a liking towards right from the start- so down to earth and simply a sweetheart. I used to watch his 30 minute meals on telly and have even given some of the recipes a shot (obviously I take more than 30 minutes). They are absolutely easy to follow and his photographs (courtesy David Loftus) are to die for. I love how he presents his final dishes on his shows, and the props he uses, sigh!

I was asked to review an app on the Google Nexus 7 tablet available at Argos here- a gadget we have both been religiously using for all our browsing and other nonsensical stuff like watch videos, chat, etc etc. I still am not too sure why people need tablets at all, because it really cant do anything your smart phone cant (techies and gadget freaks, kindly excuse). Of course size matters but I think I would have survived without one. However, now that we have it in our life, its being put to regular use. I even carry it around to our Bloggers Buzz meetings looking all important, and it does make life a wee bit more easier. If you do want to pick up a tablet (among other cool things) then Argos is the place to go to.

Coming to the app. I did break my head about which app to pick up and after some research I decided to go with good ol Jamie (first name basis and all after 2 paragraphs). The tablet is a good thing to have on your kitchen counter but what kept bugging me was the fact that I had to keep switching it on each time the screen turned off when not in use (I don’t even know if that’s the right term to use, but you get the point right?). My tablet doesn’t have a stand, so I had to keep cleaning my hands properly to pick it up and do the same. These may be irrelevant to most of you, but to me it kind of makes a difference and is a bit of a hindrance. I am trying to use the tablet more for my recipes while cooking instead of dragging my ginormous laptop on to a small kitchen counter, so ask me about it a few months from now and maybe I would have a different opinion. 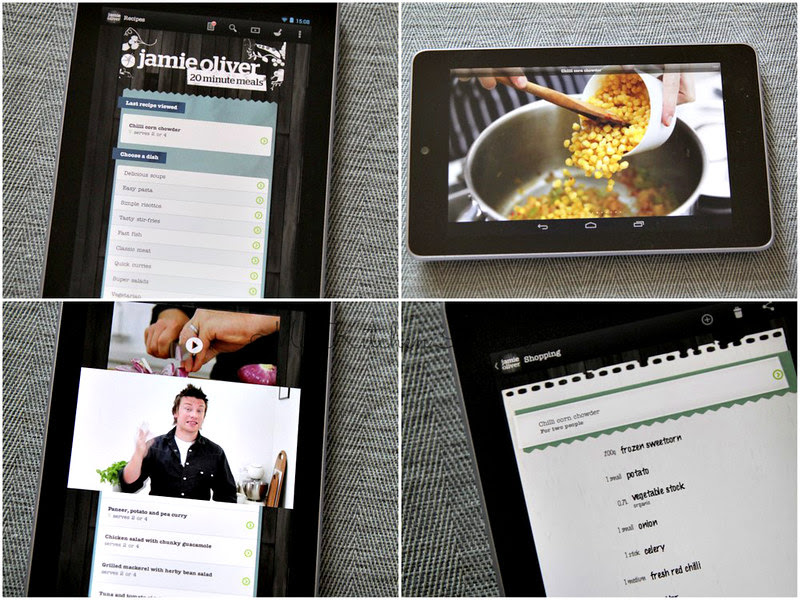 The app is a good one, but not a great one. I mean it wont be something id miss if it was taken off and I think id find most of his recipes in his book or show. But if you are a big Jamie fan and need to hear his voice once in a while, then just buy the app..really, his videos and the way he cooks is just pure entertainment 🙂

That said, his chilli corn chowder from the app was excellent. It was my first time with corn chowder (soup to be precise) and was completely surprised at how nice it tasted. Of course i couldn’t complete it in 20 minutes (what with me checking fb and whatsapp and a million other ‘apps’ in between) but it was a winner. Ro gets to taste it today and he can give his verdict. Serve it with some garlic bread and its perfect for an autumn night in, 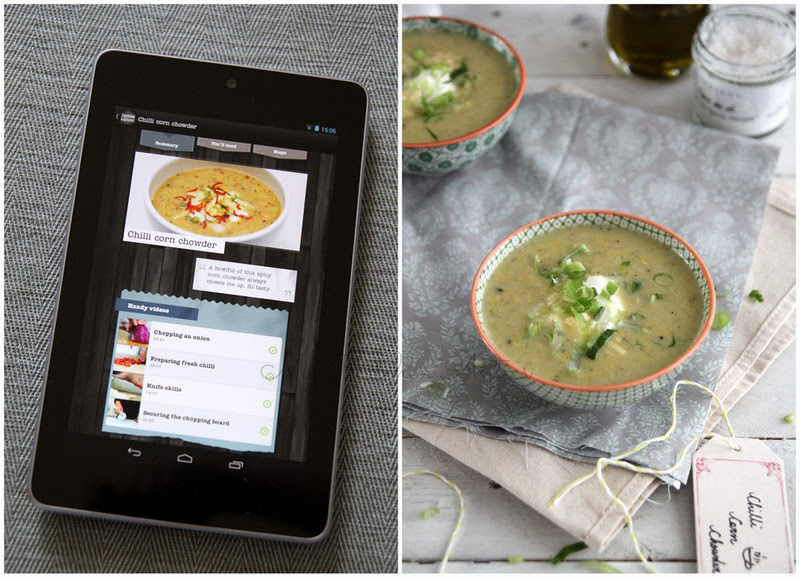 Chilli- 2, slit (de-seed if you cant handle the heat)

Salt and pepper-  to taste 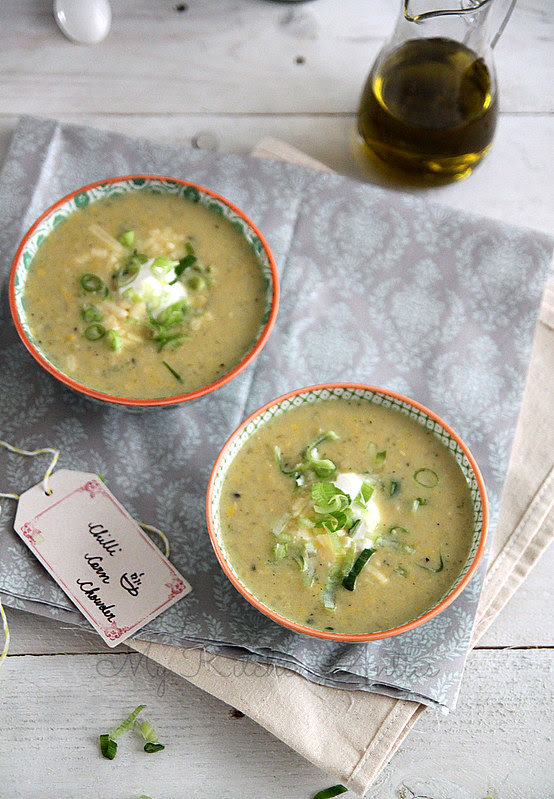 Fill a saucepan with the vegetable stock and bring to a gentle simmer over medium heat.

While that’s simmering away, slice the onion, celery and chilli.

Heat a large deep pan on medium heat and melt the butter along with a generous dash of olive oil.

Add to it the chopped vegetables with a splash of water, stir well and cover and cook on medium-low heat for about 10 minutes or until the vegetables start to soften.

Pick the thyme leaves and add to the pot of simmering stock. Let it continue to simmer for a few more minutes.

Peel and roughly grate the potato and add to the vegetable stock.

By now the vegetables would have wilted enough. Open the lid and throw in the sweetcorn. Stir it in and cook for about 2 to 3 minutes.

Carefully pour in the vegetable stock along with potato and bring everything to a boil.

Reduce heat, pour in the double cream and let it simmer for about 5 minutes after which you can take the pan off heat.

In the meat time, slice the spring onions and grate the cheddar.

Once the chowder has cooled down a bit, pulse with an immersion blender, but still retaining the texture. Don’t make it too smooth.

Taste and season with enough salt and pepper and cover the pot with a lid and keep aside.

When ready to serve, spoon ladles full of the chowder into slightly warmed bowls, top with a spoon on sour cream, sprinkle over the cheddar followed by a generous sprinkling of spring onions.

(Add some chopped chillies if you are brave) 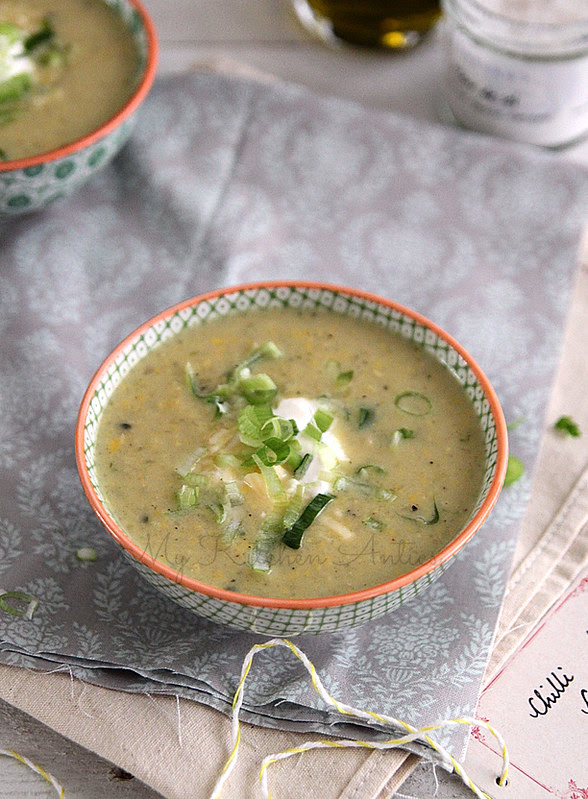 Notes: The original recipe called for just one chilli, half of which needed to be added with the vegetables and half used as garnish. Adamant that it wouldn’t be spicy, I added two whole chillies to the chowder and skipped the garnish. It was SPICY and apparently, one chilli would have been enough.

The cream is completely optional, but i had some left over cream that desperately needed to be used and so chucked it in. Worked for me.