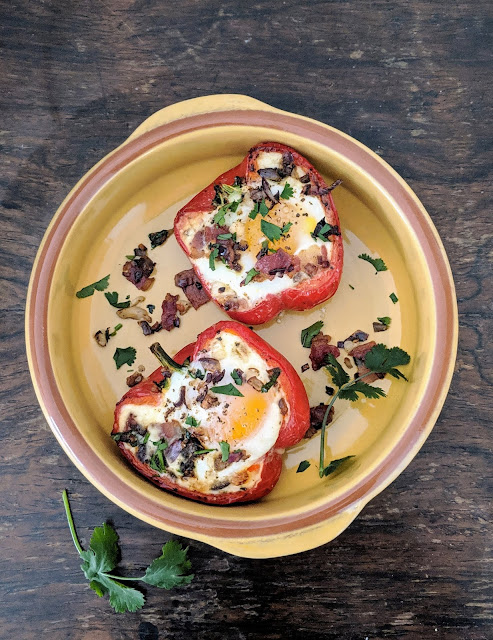 Oil- enough to grease the tray and peppers.

Place the peppers, cut side up, on the dish, brush the insides with some oil, sprinkle some salt and pepper, and bake for 15 minutes.

While that’s baking, fry the bacon in a small frying pan without any oil. Fry them till somewhat crisp.

Drain on to paper towels and keep aside

In the same oil, fry the onions, garlic and green chillies together till wilted. Say for about 3 to 5 minutes on medium heat. It doesn’t need to be really cooked down.

Throw the cooked bacon into the onions along with some salt and pepper and mix it well.

Finally mix in about 1 tbsp of chopped coriander leaves and keep aside till the peppers are ready. 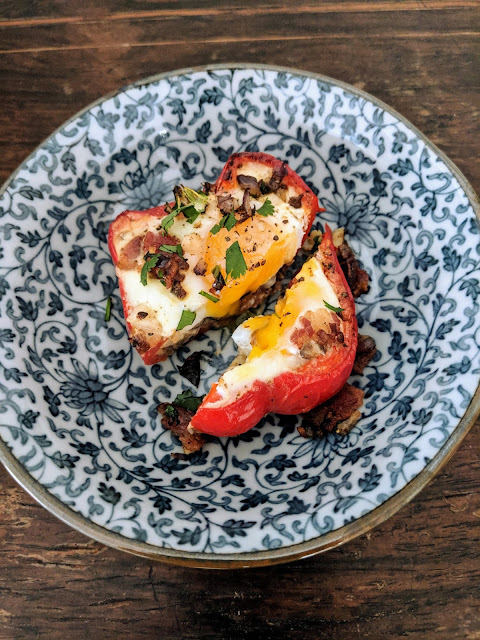 Once the peppers are done, take them out of the oven and pour in the double cream, 1 tbsp into each half. Or if the peppers are really large, add enough to cover the base.

Leave about 2 tsp of onion-bacon mix behind and divide it among the two peppers. Don’t stuff it to the top.

Break the egg into the pepper, very slowly so it remains inside the pepper as much possible. There may be spillage, but that’s ok.

Carefully pour the remaining double cream on top of the egg and top with the leftover bacon-onion mix. (if you have any left over, just eat them 🙂

Place it back into the oven for 15 minutes or till the eggs are cooked. I like mine a bit runny so i kept it just for 15 minutes. Keep it for 5 to 8 minutes longer if you want them firm.

Garnish with the remaining coriander leaves and serve with a salad as your Keto lunch.

Notes: You can use leftover chicken or mince meat as stuffing. Even ham, spinach and cheese is a good option.

Don’t skip the double cream, it makes all the difference

Its my take on oeuffs en cocotte