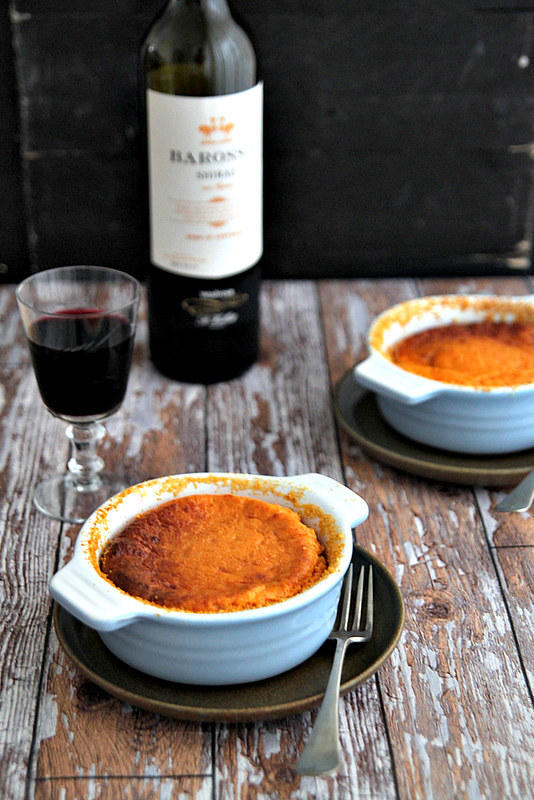 I love cheese. Like really love it. Throw cheese into anything and i will eat it without any issue. Not that I have a problem eating anything otherwise (if you see me you’ll know what I’m talking about), but cheesy things are right up my alley.

Castello Cheese has joined hands with cookery school L’atelier des Chefs to create a Cheese Cookery Class which will cover a series of classes showcasing a wide range of cheeses that Castello has to offer, and of course learning to cook with it. Food author and TV presenter Stefan Gates has also put together The Ultimate Cheeseboard, which, some of us bloggers had the privilege to try recently. Each class will focus on crafting the ultimate cheeseboard and to round it off, Matt Day has suggested complimentary drinks pairing to bring out the best from each cheese. The classes start on the 18th of July and run all through to October. Its a great way to enjoy some wine and cheese and while you are at it, learn some tips and tricks on creating fabulous dishes with it. 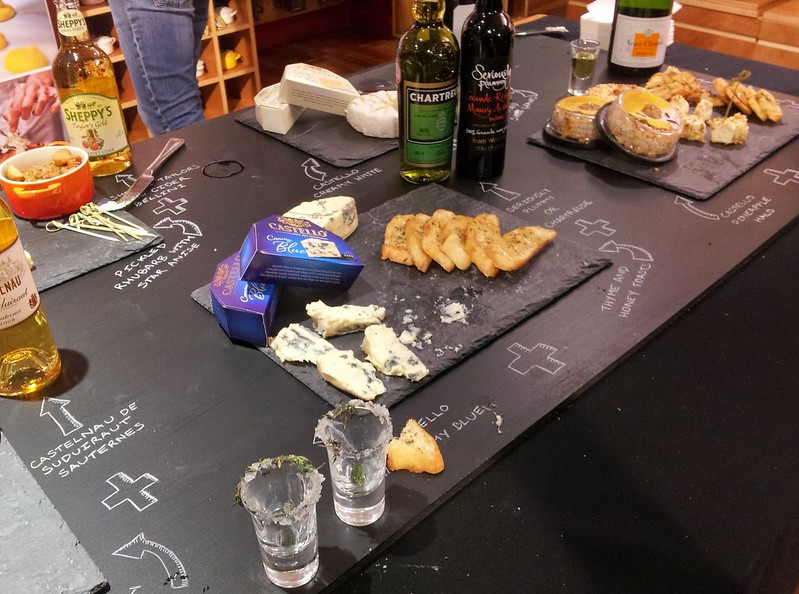 Off we went to L’atelier des Chef to get a preview of the class that was launching. We got to do some wine and drinks pairing and then went on to learn how to make a few dishes using the different varieties of cheese from Castello. There were nibbles and bubblies doing the rounds, a la Castello and a very interesting ‘Super Taster’ test conducted by Stefan Gates to see if we were a super taster. Apparently, I did have the signs of a super taster, but I actually wasn’t one. Oh well! We all went home with blue tongues (as part of the test) and a goody bag filled with cheese and recipes.

Of all the dishes we tried on the day, my favourite was the Tickler Cheddar and smoked paprika souffle which was simply mind boggling. I had to create it the very next and what do you know, thats exactly what i did. The recipe card had all the information required, and since the chef had given us tips and tricks on how to get the perfect souffle, I was pretty confident I wouldn’t fail. The not failing bit was true and the souffle turned out to be fabulous, but the downside of a souffle is that it deflates very fast. So from a photography point of view it was a bit of a bummer. Well, you are just gonna have to take my word for it and believe me when i say it did puff up nicely. 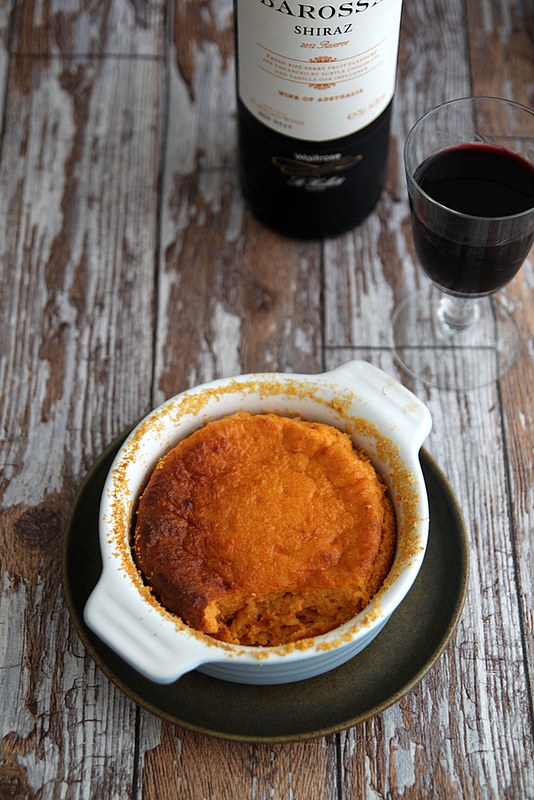 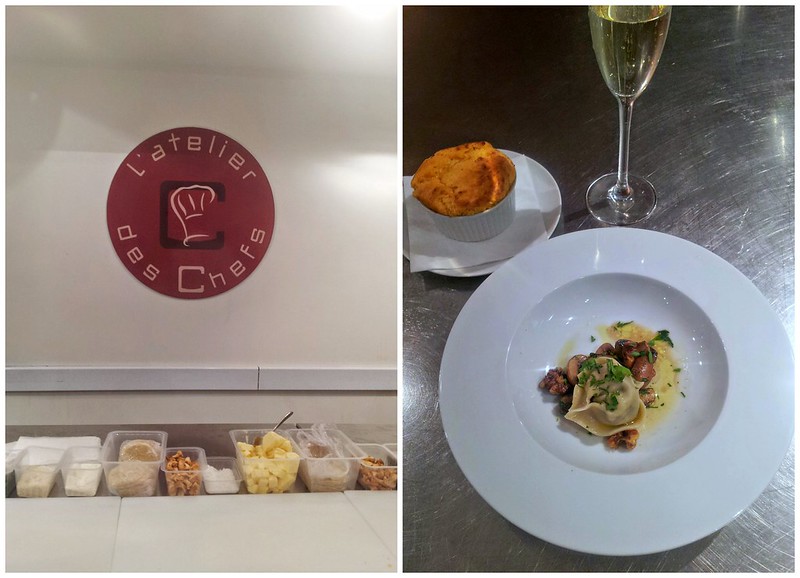 Preheat oven to 200C and butter the souffle moulds/ ramekins.

Sprinkle half of the breadcrumbs and Parmesan on to the ramekins, shake around to coat well and tip out any excess.

Start with the white sauce by boiling the milk with onions and bay leaf to infuse. Drain and keep aside.

In another saucepan, melt the butter over low heat.

Add the plain flour and make the roux, stirring continuously for about 2 minutes.

Stir in the mustard and salt then slowly pour in the milk, while continuously stirring.

Cook for a further few minutes, until you get a thick but smooth mix.

Keep aside to cool for a couple of minutes and then whisk in the egg yolks, one at a time, whisking well after each addition. if the sauce is too hot, then you risk cooking the egg yolks, and you really don’t want that.

Stir in the grated cheddar and smoked paprika.

In a clean bowl, whisk the egg whites to stiff peaks. The chef made us do this using a wire whisk at the class, and so I decided to do the same at home. It is a bit of a chore, but it wasn’t as difficult as i thought it would be. I think when the quantity is less, its much easier (mostly because I didn’t have to unearth my hand blender, wash it, use it, then again clean it..too much work).

Add one spoonful of the egg white into the sauce and mix well.

Add the remaining in, and fold gently, making sure you don’t deflate them.

Distribute the souffle mix into 3 ramekins and using a palette knife spread the top of the mix evenly. Then run your thumb or forefinger along the inside edge of the ramekin for the ‘top hat’ effect.

Place the ramekins on a baking tray and bake on the middle rack of your oven for about 15 minutes, or until the top is golden and the souffle has risen nicely. 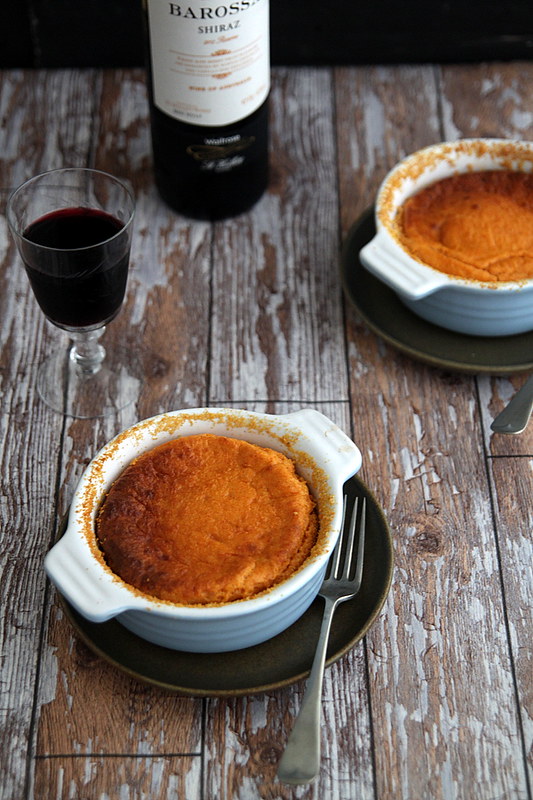 Notes: I used a large ramekin, and that was a mistake. The smaller one would have been a better quantity for one, and also I didn’t have enough to fill them, so i couldn’t get the top hat effect

Use a good quality paprika, it makes a lot of difference

Double the recipe to feed 6

You can make the white sauce well ahead and just to the egg bit just before baking,

With thanks to Castello Cheese and L’atelier des Chefs for the event invite and classes.